The All England Women’s Hockey Association Collection contains many unique and irreplaceable items of national and international significance. With the help of a grant from the National Manuscripts Conservation Trust (NMCT) and London-based professional book conservator, Clare Prince, we undertook work to repair one of the most precious and most fragile items in the Collection. 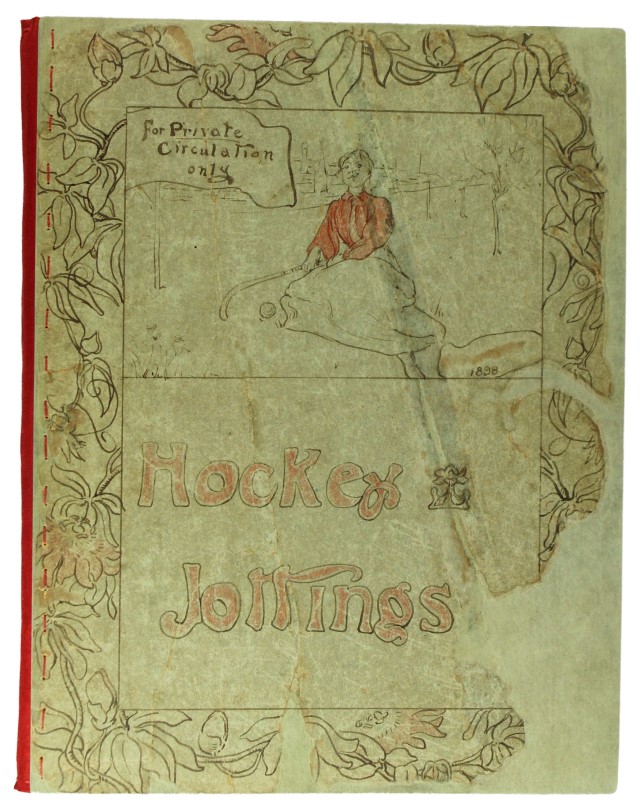 ‘Hockey Jottings’, a scrapbook complied in 1898 by and for hockey players, contains poems, match reports and original watercolour illustrations. It documents the moment that women’s hockey in the UK changed from a pass time for well-to-do Victorian ladies into an organised sport. It is key to our understanding of the early development of hockey played by women, recording the less formal, social side of its early adoption. The scrapbook was in very poor physical condition; its homemade binding was breaking down, its covers were being held together with disfiguring sellotape, and there were many tears around page edges and across text and images. It was almost impossible to handle it without causing further damage. Clare’s work focused on three main areas; mending tears, removing destructive sellotape and repairing the binding.

Each tear has been patched using remoistenable lens tissue and wheat starch paste to avoid getting the paper and inks too wet. Sellotape has been removed from the front cover of the scrapbook. This was particularly challenging as it had adhered directly to pen and watercolor designs that had to be protected. Clare found ways to gently lift the tape without any loss to the underlying paintwork. Finally the reassembled scrapbook was resewn and the textblock was reattached to the case using the original red silk spine piece and scarlet thread.

During last year’s Women’s Hockey World Cup in London, while the project was ongoing, we helped the Hockey Museum create a display about the scrapbook and Clare’s work to rescue it. Thousands of visitors to the exhibition marquee learned a bit about hockey history and the steps we’re taking to make it safe.

It has been a slow and time consuming process, but over the last 12 months Clare has painstakingly restored the scrapbook to its former glory, strengthening and stabilising it to ensure that its original, quirky charm is preserved intact for future generations of researchers and hockey enthusiasts to study, learn from, and enjoy.