AR can improve the lives of older adults, so why are apps designed with youngsters in mind?

Augmented reality (AR) is poised to revolutionise the way people complete essential everyday tasks, yet older adults – who have much to gain from the technology – will be excluded from using it unless more thought goes into designing software that makes sense to them.

The danger of older adults falling through the gaps has been highlighted by research carried out by scientists at the University of Bath in collaboration with designers from the Bath-based charity Designability. A paper describing their work has received an honourable mention at this year’s Human Computer Interaction Conference (CHI2021) – the world’s largest conference of its kind.

The study concludes that adults aged 50+ are more likely to be successful at completing AR-prompted tasks (such as ‘pick up the cube’ followed by ‘move the cube to the blue area’) when the steps are shown by a ‘ghosthand’ demonstrating the action rather than the more commonly used arrow or some other visual aid.

According to the research team, many manufacturers of AR software are failing to factor the needs and preferences of older people into their application designs.

“We can’t expect people to benefit from AR technology if they can’t follow the prompts shown to them,” said Dr Christof Lutteroth from the University’s Department of Computer Science.

Thomas Williams, the Doctor of Engineering student (funded by the EPSRC) who conducted the research from the university’s Centre for Digital Entertainment (CDE), said: “A lot more thought needs to go into understanding what older adults need from augmented reality, so users in this group understand the prompts they’re given straight away.”

He added: “AR technology has great potential for improving the lives of older adults but most AR designers give little or no thought to the kind of augmentations they use for this population.”

Supervising the project were Dr Lutteroth and Dr Simon Jones, also from Bath’s Department of Computer Science, Dr Elies Dekoninck from the Department of Mechanical Engineering and Dr Hazel Boyd from Designability.

For the study, participants were asked to lift, move, lower, open and close 3D shapes on a foam board in response to four different types of visual instruction displayed on a laptop that was running the AR application. Overall, participants preferred the ghosthand over other AR prompts, and were both faster at completing tasks and more confident in their actions. Assisted by the hand, they responded up to twice as fast and twice as accurately as they did when using another, more commonly used prompt. Participants commented that they could relate to the hand and it was clearer to them than the other visual prompts. 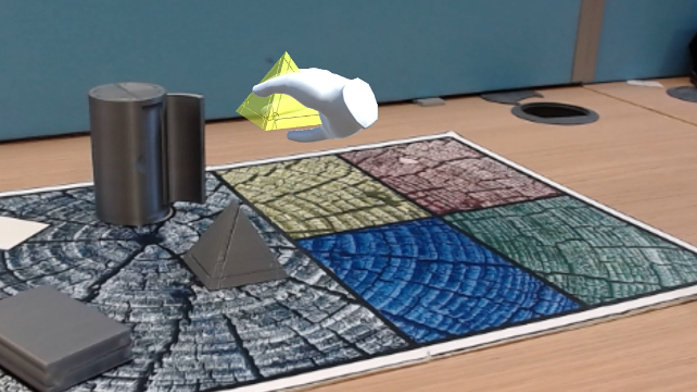 Demonstrations delivered by three other ‘augmentations’ – an arrow, a transparent ghost of the object and a pulsating transparent ghost – often resulted in participants hesitating before taking action and needing to see the visual instructions more often to get the task completed. It also led to participants being less sure that they’d done the job right.

“Though AR technology has great potential for improving the lives of older adults, this user group is rarely considered the target for AR development,” said Dr Lutteroth. “I think this is the first study to investigate the accessibility of AR technology to older users.”

How AR can help with dementia and memory problems

Researchers envision AR technology soon being adopted to help others:

The research teams sees huge potential for AR technology being used to help people with dementia and other memory difficulties. Using AR, a task such as preparing food, hand washing or making a cup of tea can be broken down into individual steps, each step represented simply and clearly on a screen or AR glasses, making it far easier for the job to be completed successfully. AR is also being explored as a diagnostic tool to detect early signs of cognitive decline and provide people with an earlier diagnosis of dementia.

“Activities of daily living that we take for granted can be more difficult for people with dementia, and AR prompting could make a big difference for them if designed appropriately,” said Dr Boyd.

So why are older adults being left out of AR research? “Designers often find it difficult to know how non-designers and older people think if they’re not big users of tech.” explained Dr Jones.

“Another common problem is that designers often prioritise in a way that’s not inclusive – they worry about the aesthetics of an application more than the ease of use for everyone. This is fine if you’re a regular user of an application but it violates an essential principle of usability: you shouldn’t have to read a manual to achieve what you’re trying to achieve.”

AR is gaining popularity in medicine, cultural heritage tourism, industrial assembly, and more recently, in the home. It allows people to use their smartphones or special glasses to immerse themselves in a real-world environment where the objects in their immediate vicinity are enhanced by digital content (such as a ghosthand). Over the next decade, computer scientists expect this technology to become increasingly integrated into all our daily lives.

“We’ll be using AR for everything from fixing our own washing machines to deciding whether we’re better off catching the bus from bus stop 1 or 2 as we’re walking down the street,” said Dr Dekoninck.

Many people encountered AR for the first time in 2016 with the release of Pokémon Go. This AR-enhanced game allowed players to use their smartphone screens to spot creatures from the Pokémon universe superimposed on the real world.

The University of Bath research explained