The autonomous car, one of three cars in the competition to be designed and built by University of Bath students, was the sole qualifying entrant into the FSUK Autonomous Driving System (ADS) class and took first place awards in the Business Presentation & ADS Design categories.

Bath was one of just four universities to enter the FS-AI competition at Silverstone, and the only one to qualify for the ADS class by entering their own car equipped with sensors and software that can allow it to drive unaided. Other teams in the autonomous competition opted to enter a separate class with software-only entries, which were loaded into a self-driving car supplied by the competition’s organiser the Institution of Mechanical Engineers.

TBRe worked with the Faculty of Engineering & Design’s longstanding partner AB Dynamics, which is based in Bradford-on-Avon, to fit a full suite of driving robots to the car they previously used in competition in 2018.

Bath also scored success with the Team Bath Racing (TBR) Class 2 ‘feeder’ team, which is made up of undergraduates who will create next year’s main TBR entry. They took first place in the Class 2 Engineering Design category, leaving them well-positioned for success in 2020.

Bath’s two main Class 1 entries, the petrol-powered TBR19 and the electric TBRe19 cars, both faced difficulties during preparation and testing that scuppered their chances of repeating their previous successes at the event. They nevertheless scored overall placings of 16th and 28th respectively, out of 81 entries from universities based in the UK, Europe, and as far afield as India and Egypt.

TBR business manager Jack Harris said: “We certainly learned a lot this year. Our 16th place overall perhaps did not reflect where we truly deserved to be, but the team worked extremely hard to ensure the car is more reliable and powerful for our events in Austria and Germany in the coming weeks.”

TBRe accumulator lead Natalie Kyprianou said: “Unfortunately, the combination of a few small issues meant that we ran out of time to collect our final scrutineering sticker and so could not compete on track.

“Nevertheless, we saw the true spirit of TBRe and University of Bath engineers shine through – and we are now back in our lab testing and improving to perform to our true potential at Formula Student Spain at the end of August.”

Dr Ben Metcalfe, academic lead for TBRe, said: “Our competition teams represent some of our very best and brightest students, and it is a real pleasure to see them succeed in the new autonomous vehicle class. We now look forward to a strong showing from all teams at our European events.” 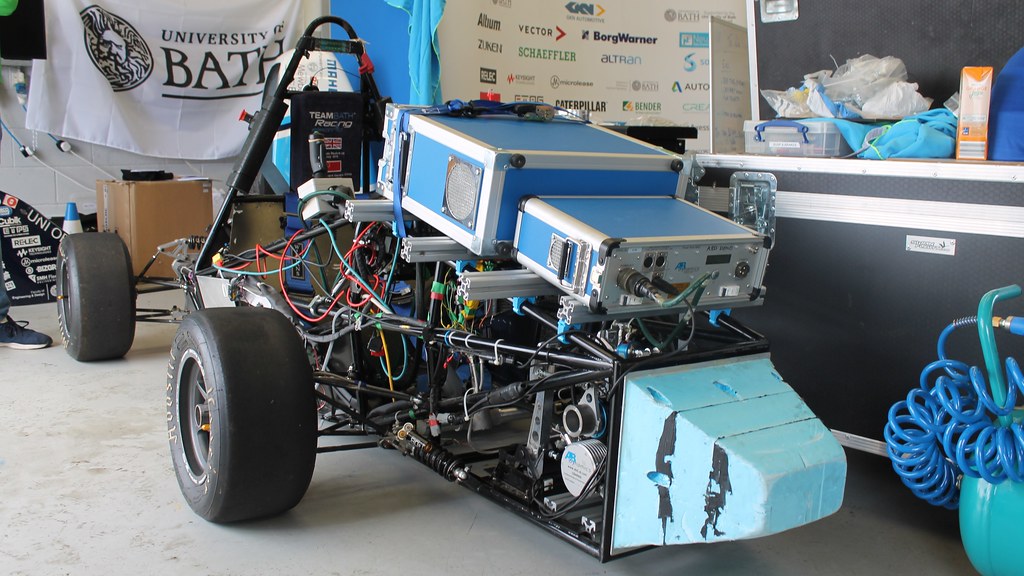 Find out more about Formula Student