Milner Centre for Evolution have announced the winners of a competition for primary school children to write and illustrate a story or poem about genetics.

"Storytelling Science: The Letters of Life" aims to get children in year 4 thinking creatively about communicating science. The competition was supported by funding from the Evolution Education Trust and the Genetics Society.

566 children from schools across the UK sent in a one-page illustrated story or poem on the theme of genetics.

As inspiration, the children were given a story book called Little Letters, written by genetics researcher Dr Tiffany Taylor, which introduces the ideas of DNA, genes and genetics in a fun bedtime story.

Teachers were also given a free activity to teach about the concept of genetics to the class, to open up discussion and questions about the topic.

Entries were judged by a panel including scientists from the Milner Centre for Evolution, and Deputy Vice-Chancellor of the University of Bath, Professor Bernie Morley. They selected five winning stories and 20 highly commended entries.

Dr Tiffany Taylor, Royal Society Dorothy Hodgkin Research Fellow at the Milner Centre for Evolution, said: “I really loved reading all the entries. Selecting just five winners was incredibly difficult, but the ones that stood out were those that took the information given to them and used it to tell their own story.

"I decided to launch Storytelling Science as a way to get children thinking creatively about communicating science. I think science is often thought of as being an unimaginative and prescriptive discipline, however, creativity is essential in good science.

“I had recently published a story for children aged 6-9 on genetics, which I wrote after reading research from Milner Centre Director Prof Laurence Hurst and colleagues that showed a prior understanding of genetics improves understanding of evolution, and should be learnt first.

“So using my book, Little Letters, as an inspirational starting point, I asked children in Year 4 to submit a one-page illustrated story or poem on the theme of genetics - and the result was wonderful!"

Dr Jonathan Milner, founder of the Evolution Education Trust and alumnus of the University of Bath, said: “I was delighted to support this competition in schools as I felt it was important to continue the valuable work on evolution education throughout the pandemic.

“The competition has been a fantastic tool to promote the understanding of genetics and evolution in schools and it’s great to be able to see how effectively the children have engaged with the subject in such a creative way.”

The style of the winning entries were all different. Feedback from the judges highlighted:

All the winning entries were beautifully illustrated and communicated science in a fun and creative way.

The winners will receive signed copies of Little Letters and Little Changes (a story from the same author about evolution), a print of an illustration from Little Letters signed by the illustrator (James Munro), a £20 book voucher and a children’s lab coat embroidered with the Milner Centre logo. In addition their whole class will also receive a virtual Q and A session with the author.

Winning entries for Storytelling Science: The letters of life 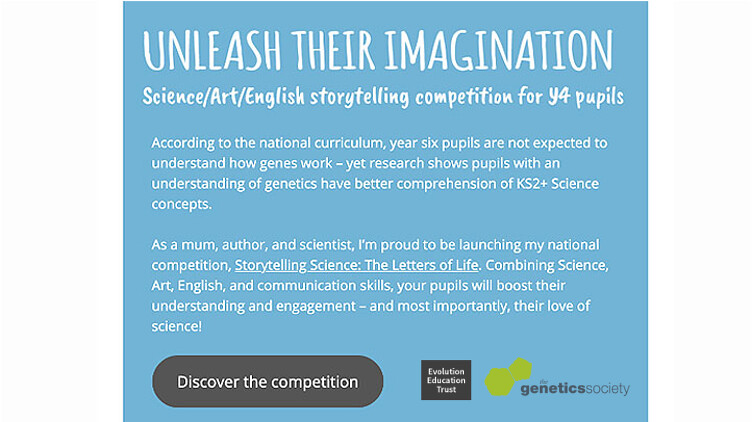