An “absolutely exquisite” fossil of a snake that had four legs has been discovered and may help show how snakes made the transition from lizards to serpents.

It is the first known fossil of a four-legged snake, and the team - including Dr Nick Longrich from the University's Department of Biology & Biochemistry - says that this discovery could help scientists to understand how snakes lost their legs.

Their findings were published today (Friday 24 July 2015) in the journal Science.

Dr Dave Martill from the University of Portsmouth discovered the fossil and led the research team. He said: “It is generally accepted that snakes evolved from lizards at some point in the distant past.

“What scientists don’t know yet is when they evolved, why they evolved, and what type of lizard they evolved from. This fossil answers some very important questions, for example it now seems clear to us that snakes evolved from burrowing lizards, not from marine lizards.”

The fossil, from Brazil, dates from the Cretaceous period and is 110 million years old, making it the oldest definitive snake.

Dr Martill discovered the fossil as part of a routine field trip with students to Museum Solnhofen (Germany), a museum that is well-known for its prestige with regard to fossils.

He added: “The fossil was part of a larger exhibition of fossils from the Cretaceous period. It was clear that no one had appreciated its importance, but when I saw it I knew it was an incredibly significant specimen.”

How the snake lost its legs

Dr Martill worked with expert German palaeontologist Helmut Tischlinger, who prepared and photographed the specimen, and Dr Nick Longrich from the University of Bath’s Milner Centre for Evolution, who studied the evolutionary relationships of the snake.

Dr Longrich, who had previously worked on snake origins, became intrigued when Martill told him the story over a pint at the local pub in Bath.

He said: “A four-legged snake seemed fantastic and as an evolutionary biologist, just too good to be true, it was especially interesting that it was put on display in a museum where anyone could see it.”

He said he was initially sceptical, but when Dr Martill showed him Tischlinger’s photographs, he knew immediately that it was a fossil snake.

The snake, named Tetrapodophis amplectus by the team, is a juvenile and very small, measuring just 20cm from head to toe, although it may have grown much larger. The head is the size of an adult fingernail, and the smallest tail bone is only a quarter of a millimetre long.

But the most remarkable thing about it is the presence of two sets of legs, or a pair of hands and a pair of feet.

The front legs are very small, about 1cm long, but have little elbows and wrists and hands that are just 5mm in length. The back legs are slightly longer and the feet are larger than the hands and could have been used to grasp its prey.

Dr Longrich said: “It is a perfect little snake, except it has these little arms and legs, and they have these strange long fingers and toes.

“The hands and feet are very specialised for grasping. So when snakes stopped walking and started slithering, the legs didn’t just become useless little vestiges - they started using them for something else. We’re not entirely sure what that would be, but they may have been used for grasping prey, or perhaps mates.”

Interestingly, the fossilised snake also has the remains of its last meal in its guts, including some fragments of bone. The prey was probably a salamander, showing that snakes were carnivorous much earlier in evolutionary history than previously believed.

A snake, not a lizard Helmut Tischlinger said: “The preservation of the little snake is absolutely exquisite. The skeleton is fully articulated. Details of the bones are clearly visible and impressions of soft tissues such as scales and the trachea are preserved.”

Tetraphodophis has been categorised as a snake, rather than a lizard, by the team due to a number of features:

Tetrapodophis would have lived on the bank of a salt lake, in an arid scrub environment, surrounded by succulent plants. It would probably have lived on a diet of small amphibians and lizards, trying to avoid the dinosaurs and pterosaurs that lived there.

At the time, South America was united with Africa as part of a supercontinent known as Gondwana. The presence of the oldest definitive snake fossil in Gondwana suggests that snakes may originally have evolved on the ancient supercontinent, and only became widespread much more recently.

The University of Bath’s Milner Centre for Evolution is the first dedicated Centre for research and public engagement for evolutionary science in the UK. It is named after alumnus Dr Jonathan Milner who donated £5 million in June to establish the Centre.

An impressive 85 per cent of the University’s Biological Sciences research was judged as world-leading or internationally excellent in the recent independently-assessed Research Excellence Framework 2014.

An artist's impression of how the snake might have looked 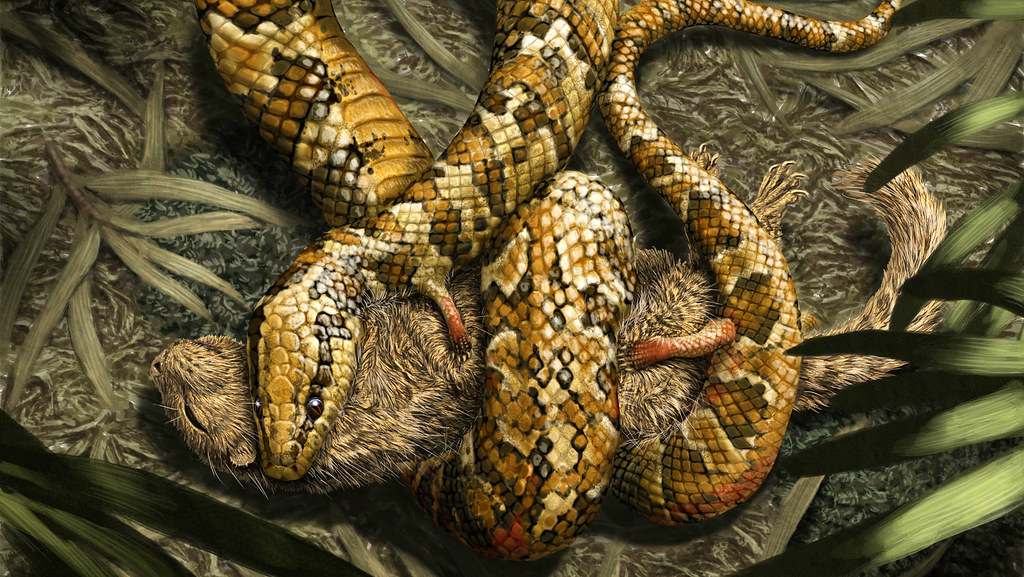