A new way of using colour to detect disease, inspired by the bright blue of certain corals and mushrooms, has been developed by chemists at Bath

Stains that make specific components of a live cell light up under a microscope have become powerful tools for detecting disease and monitoring biological processes, but the choice of available stains is severely limited and all options on the market are imperfect.

Researchers at the University of Bath are set to fix these shortcomings by creating an extensive catalogue of new, high-performing stains – known as ‘fluorescent probes’ – that will make it far easier for scientists to zero in on the cellular processes that underpin disease.

Fluorescent probes consist of two parts: a ‘receptor’ (whose purpose is to detect a particular substance) and a ‘fluorophore’ (a molecule with fluorescent properties). Fluorophores absorb light of a specific wavelength and emit light of a different, typically longer, wavelength, which appears as a colour. It is this coloured light that gives tissue or cells the stain that makes them stand out.

“There are about a dozen well-known fluorophores, each with some disadvantages, so there’s a pressing need to discover and develop new ones,” said Dr Simon Lewis, based in the Department of Chemistry at Bath and principal investigator of the probe project.

“We need fluorophores with different characteristics to the ones we already have, so we can overcome the current limitations in bio-imaging.” 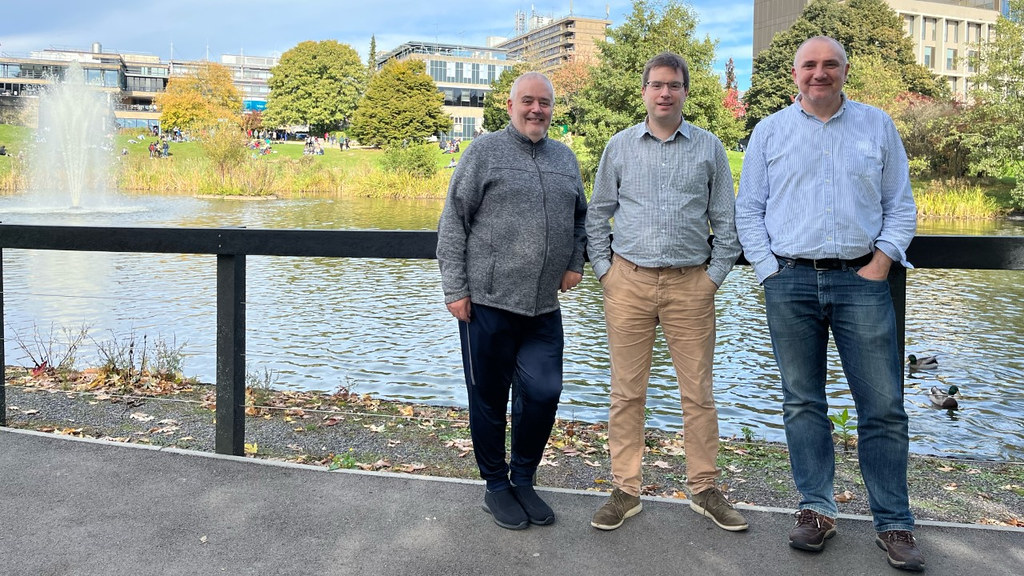 Dr Lewis’s probes are being developed from azulene – a bright blue chemical that occurs in nature and is responsible for the blue colour of certain mushrooms (such as Lactarius indigo) and corals.

The main novelty of the azulene probes is that they allow a cell to glow more than one colour at a time, which will be helpful for detecting interrelated processes as they unfold in human tissue – for instance, the presence of both calcium and magnesium ions in a single cell, with one ion glowing red and the other green.

Dr Lewis anticipates this feature being especially helpful when exploring the mechanisms contributing to complex diseases such as Alzheimer’s.

Explaining, he said: “Amyloid beta is a protein that aggregates in the brain cells of people with Alzheimer’s disease, and when it does, the environment around it effectively becomes more viscous. Using azulene, you could have a probe that emits green light when it detects amyloid beta and another that glows blue to show the protein is clumping together rather than floating around as it normally would.”

Dr Lewis and his team have already developed and trademarked AzuFluor® 483-Bpin, an azulene-based probe for detecting reactive oxygen species such as free radicals and peroxides. Free radicals are present in all cells but can lead to cancer and neurodegenerative diseases when found in excess.

The researchers plan to develop at least 20 more probes by the end of their current project. These will join AzuFluor® 483-Bpin in being commercially available through the non-profit organisation Ximbio.

He added: “Currently there’s no class of probes that does all these things all of the time, but AzuFluor does and I’m optimistic that the rest will too, though brightness could still be improved upon.”

The azulene project will start on January 1, 2023 and end December 2025. By then, Dr Lewis expects the probe catalogue to be virtually complete. The team plan to develop suites of probes to detect substances that play roles in conditions including cancer, asthma and Parkinson’s disease as well as Alzheimer’s disease.

This research is funded by the EPSRC.