In a medical field where smaller is better, researchers discover the world’s tiniest antibodies

Researchers at Bath and UCB have found a way to produce miniaturised antibodies, opening the way for a potential new class of treatments

Researchers at the University of Bath and biopharma company UCB have found a way to produce miniaturised antibodies, opening the way for a potential new class of treatments for diseases.

Until now, the smallest manmade antibodies (known as monoclonal antibodies, or mAbs) were derived from llamas, alpacas and sharks, but the breakthrough molecules isolated from the immune cells of cows are up to five times smaller. This is thanks to an unusual feature of a bovine antibody known as a knob domain.

The potential medical implications of the new antibodies’ diminutive size are huge. For instance, they may bind to sites on pathogens that regular antibody molecules are too large to latch on to, triggering the destruction of invasive microbes. They may also be able to gain access to sites of the body which larger antibodies can’t. 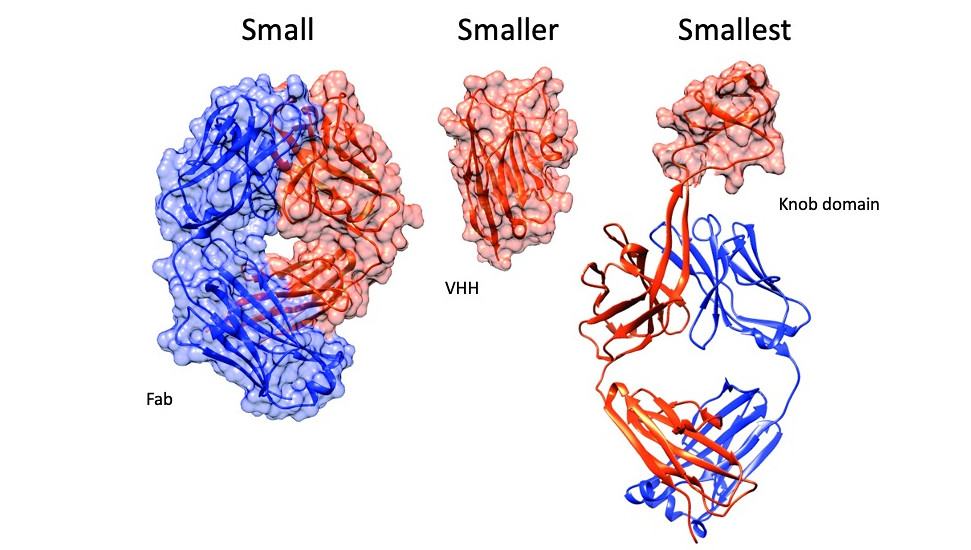 From left to right: The antigen binding fragment of an antibody (Fab), an antibody fragment consisting of a single domain antibody (VHH) and a knob domain.

Antibodies consist of chains of amino acids (the building blocks of proteins) that join together in a loopy structure. The loops in the chains, known as complementarity determining regions, bind to antigen targets, thereby activating the immune system. Bovine antibodies are loopier than most, and around 10% include a knob domain – a characteristic that is unique among jawed vertebrates. These tightly packed bundles of mini-loops are presented on a protein stalk, far from other loops, and are thought to play a critical role in binding.

The reason knob domains are creating a stir is simple: isolated from the rest of the antibody, these loop extensions can function autonomously, effectively making tiny antibodies that can bind tightly to their targets.

Professor Jean van den Elsen from Bath’s Department of Biology and Biochemistry, who was involved in the research, said this finding was surprising. “These knobs are able to bind their target as complete antibodies, so in effect we have been able to miniaturise antibodies for the first time.”

These new molecules have been developed as part of a collaborative project between the University of Bath and global biopharma company UCB. They originate from cows that have been immunised by injection with an antigen (particles of a foreign body), eliciting an immune response. Natural antibodies are mined from the cow, through a process of sorting and ‘deep sequencing’ of antibody producing B-cells. The resulting antibodies are then manufactured in the lab in cultures of human cells.

Regular antibodies are made by the human body as part of its natural response to an infection, whereas monoclonal antibodies are administered to a patient when an infection has taken hold and they are struggling to beat it unaided. Over the past few decades, mAbs have emerged as effective treatments for various medical conditions, including cancers, autoimmune disorders and serious viral infections. It is hoped that miniaturised mAbs will eventually be involved in a range of drug therapies.

The antigen used by the Bath researchers to elicit an immune response in cows is called Complement component C5, and C5 plays a role in many human diseases (including COVID-19), where there is an inflammatory response.

Not only do these novel monoclonal antibodies have a size advantage over regular mAbs but they are also more robust, meaning they remain stable for longer.

“They have very sturdy, tightly packed structures,” said Professor van den Elsen. “So not only do they get to places better than other antibodies but they may also have a far longer shelf life.”

Alex Macpherson, a PhD student at Bath and a biochemist at UCB, who is lead author on the paper, added: “Antibody drug discovery is an established field but this research opens up entirely new opportunities. There is huge potential use for these miniaturised antibodies.”

Alastair Lawson, immunology Fellow at UCB and UCB lead on the project said: “This research has led to the discovery of the smallest clinically relevant antibody fragments ever reported and we are very excited about their potential.”