Most successful season ever for Team Bath Racing

The University of Bath’s Formula Student team, Team Bath Racing has been confirmed as the UK’s top team, ranked 15th in the world.

Team Bath Racing, which is made up of 20 undergraduate student engineers from the University of Bath, compete annually at the Formula Student (FS) competitions which challenge student engineers to design, build and race a single-seat racing car in one year.

This year, the 2015 team (TBR15) achieved its best ever results in Team Bath Racing’s history achieving a world ranking* of 15 out of over 600 international teams and for the second year running, the top UK team. Team Bath Racing’s domination amongst the UK teams is highlighted by the next highest UK team being ranked a considerable 49 places below with Birmingham at 64th and Oxford Brookes at 75th in the world rankings.

TBR15 kicked off its season with an exceptional performance at the UK FS competition held at Silverstone where they were the top ranked UK team and came fourth overall out of 95 teams in the main Class 1 event. This included for the first time, achieving first place in the endurance race, the toughest of the individual tests.

Additionally, in the Class 2 event which consisted of three individual tests – car design, cost and sustainability, as well as the quality of a business pitch, the TBR16 team performed extremely well and was not only named overall winner, but also achieved outright wins in each of the three tests, something not previously achieved at a FS competition. TBR16 will go on to build their car and enter as a Class 1 team in 2016.

TBR15 were the only UK team to compete in Austrian FS event, coming 5th overall. The team achieved an identical result to their predecessor’s (TBR14) and received positive attention by the judges, fellow competitors and spectators alike for their impressive use of carbon fibre and 3D printed structures, as well as being noted for having an excellent powertrain system.

Formula Student Spain marked a first for TBR15, with no Bath team having ever competed at this event. In addition to achieving 6th overall, this result signified another first for Bath, with no TBR team having previously competed in three consecutive events without failure, highlighting the build quality of this year’s car.

TBR15 Business Manager and MEng (Hons) Mechanical with Automotive Engineering graduate, Tom Stevens said: “At the beginning of the year we had very high expectations for TBR15, but to see those expectations become reality is so satisfying. Finishing all three of the endurance events was a fantastic achievement for us and I’m extremely proud to now be a member of Team Bath Racing’s most successful team ever.”

Dean of the Faculty of Engineering & Design, Professor Gary Hawley added: “This is a fantastic achievement and all the team and those supporting it are to be congratulated. This is a capstone activity within the faculty and this year we will be bringing forward a Formula-Electric team. “Coupled with our submarine and drone teams it demonstrates the creative innovation that our engineering students are capable of as well as their competitive nature. It is no wonder that our students are highly prized by industry for placements and for graduate careers.”

89 per cent of the research carried out by the University’s Department of Mechanical Engineering was ranked ‘internationally excellent’ (3) and ‘world-leading’ (4) by the 2014 Research Excellence Framework (REF), an independent assessment of UK university research activity.

*The full world rankings can be found at http://mazur-events.de/fs-world/?cl=1. TBR15’s world ranking of 15th is based on the cumulative results from the Silverstone and Austrian event. Once the rankings are updated to include the Spanish event, it is expected Bath may rise higher than 15th in the world. 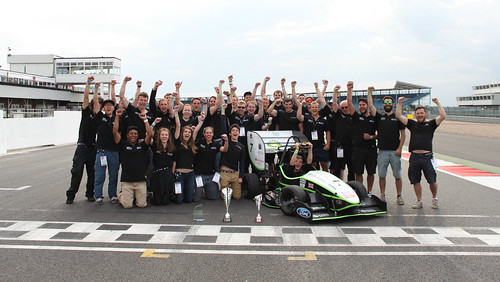