The International Astronomical Union (IAU) prize honours graduate students and early-career researchers whose posters show a high level of excellence and distinction in academic achievement. The IAU's overall mission is to promote and safeguard the science of astronomy through international cooperation.

Ms Jordana’s poster – one of two to win a best-poster award – describes the magnetic properties of a Gamma-ray burst. It was presented at the IAU Symposium 360, conference held this year in Japan. The conference followed a hybrid formula, with some delegates attending in person and others remotely. 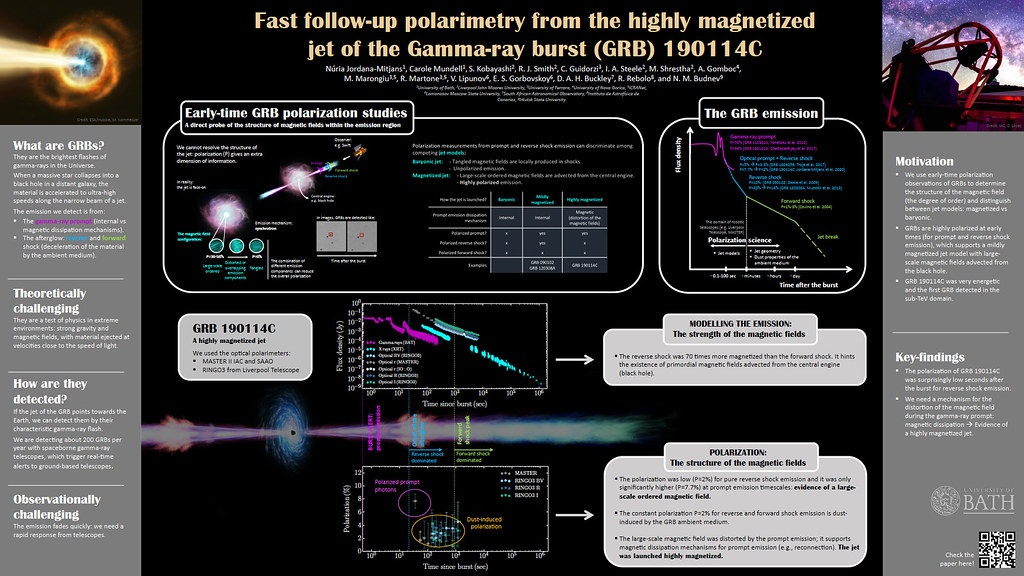 In her research, Nuria uses state-of-the-art technology on autonomous robotic telescopes to probe distant magnetic fields, which are thought to drive powerful cosmic stellar explosions in the distant universe.

Ms Jordana said: “The conference was about Gamma-ray burst polarisation in general, not just my specific astrophysics topic, so winning means a lot to me. From the comments I received, it was clear that people are genuinely interested in the science we use in our research, which is very nice to know.”

Professor Carole Mundell, Hiroko Sherwin Chair of Extragalactic Astronomy and head of Astrophysics at Bath, said: “This was a high profile international research conference with over 150 world-leading researchers from over 30 countries sharing their state-of-the-art research in astronomical polarimetry."

Professor Mundell, who works closely with Ms Jordana, both as her supervisor and as a fellow researcher, added: “It’s an outstanding achievement to win the best conference poster award, and a testament to the impact of Nuria’s research and her ability to communicate it to a very diverse, expert audience.”