Racemases: The hunt for drugs to neutralise these critical enzymes

Bath academics explore racemases – an important type of enzyme that is linked to certain cancers and other life-threatening diseases while also being critical to cell function – in a paper published in the prestigious journal Chemical Society Reviews. The scientists also propose new strategies for finding drugs that neutralise these enzymes.

Many racemases and epimerases perform vital roles in human and animal cells, and in disease-causing organisms. They facilitate proper nerve function, the degradation of toxic substances, the formation of bacterial cell walls and the conversion of certain drugs into their active form (the best known conversion is seen with ibuprofen, which is taken as a mixture of isomers and converted in the liver to the active S-isomer). But while normal levels of racemase and epimerase function are generally beneficial, increased levels can be harmful. Because of this, there is considerable interest in developing drugs that impact these enzymes.

There have been promising outcomes in lab experiments where racemases (and related epimerases) have been targeted with experimental drug molecules. These molecules reduce the functional activity of racemases and have the potential to be developed into new treatments for a wide range of diseases, including prostate, breast and brain cancers; Alzheimer’s disease and other dementias; bacterial and viral infections; Chagas disease, and the complications of diabetes.

Notable successes in developing racemase-fighting molecules include the identification of D-cycloserine (a natural product discovered in 1954), which is used in the treatment of tuberculosis – a major global health threat.

Until now, there has been no general review of how drugs can be used to stop these potent enzymes from working. The new Bath paper explores all known strategies used to design or discover such drugs, including methods adopted to measure racemase function and by extension drug effectiveness. The paper also surveys recent advances in the development of drugs targeting specific enzymes, including alpha-methylacyl-CoA racemase – an enzyme that is linked to prostate cancer, and which is the focus of the team’s own research.

In addition, the Bath researchers set out to develop a coherent model of how racemases and epimerases perform their functions. Their hope is to use this model to design and develop more effective drugs. 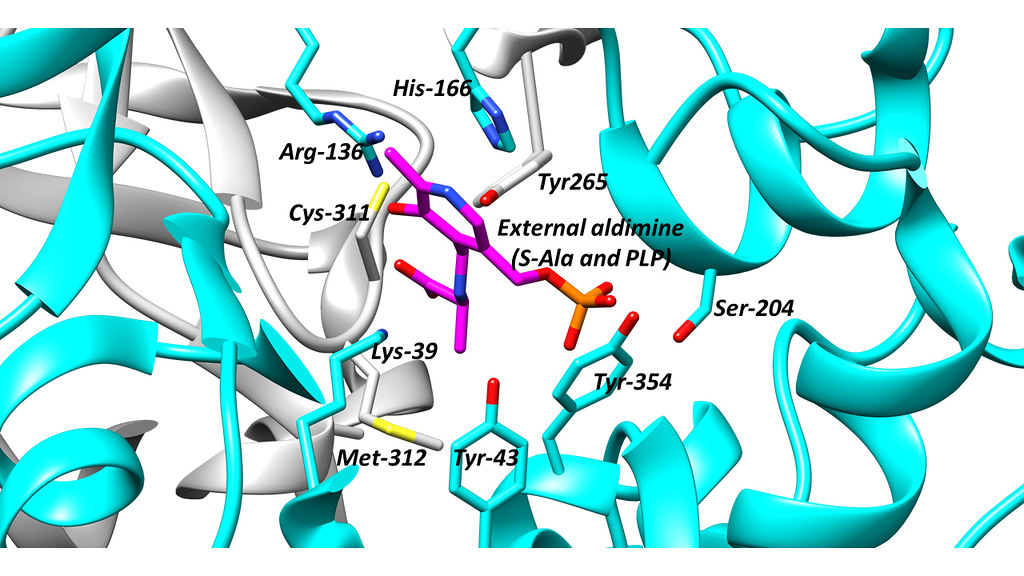 The active site of alanine racemase, a key antibacterial target

In biological systems, one of the two stereochemical isomers predominates, but there are many examples where the less abundant isomer plays a specific, critical role in the cell. For example, the amino-acid L-serine is abundant in the proteins and the membranes of all cells, while its isomer D-serine has a specialised role in neurotransmission in humans and other higher animals. Racemases and epimerases catalyse the formation of the less abundant of the two isomers from the more abundant, and hence change the way in which the molecule twists. They perform their reactions using several different chemical strategies, but by far the most common is the removal of a proton from an activated carbon atom followed by delivery of a proton from the opposite side to quench the resulting intermediate.

As well as the role they play in human health, racemases and epimerases have important biotechnology applications in green and sustainable routes to chemicals with high economic value. These enzymes can be used to produce difficult-to-access stereochemical isomers of amino acids and other molecules that are important in the food, cosmetics, pharmaceutical and fine chemicals industries.

For many years, the Bath team has worked on the α-methylacyl-CoA racemase (AMACR) – an enzyme that is overactivated in prostate and other cancers. Research on this enzyme, and on finding compounds to stop it from working, has been funded by several organisations, including Prostate Cancer UK.

Dr Matthew Lloyd, lead author of the paper, said: “Racemases and epimerases have traditionally been seen as niche enzymes, however their pivotal position within biological processes means they make excellent drug targets and can be exploited in the manufacture of important chemicals that have great economic value because they are used in the food, cosmetic, pharmaceutical and other industries.

“Our systematic analysis of racemase enzymes, the reactions they catalyse and the ways in which they can be stopped from working reveal several common themes and suggest several new avenues of research. Thanks to our detailed review, we now have a much better theoretical understanding of how these enzymes work, and this knowledge is essential if these enzymes are to be effectively targeted by the new drugs being developed."

He added: “It’s also clear that there are several potential strategies to develop new drugs, such as fragment-based drug design and virtual screening, which are ripe for exploitation. We hope this paper will stimulate new research on these under-appreciated enzymes.”

Simon Grieveson, head of research at Prostate Cancer UK, said: “Prostate cancer is the most common cancer in men, and we desperately need better treatments. That’s why we’re committed to funding research like this which explores promising new ways of tackling the disease.

“Through their detailed lab work, Dr Lloyd and his team have successfully found ways to target and suppress a key protein involved in prostate cancer growth. We look forward to seeing how this research progresses over the coming years and its role in the development of new treatments for men.”