Shooting for the stars: astrophysicists join the global tech revolution

The University of Bath has become a major consortium partner in 4MOST - a telescope facility that's set to change the face of astrophysics over the next decade.

The University of Bath has become a major consortium partner in 4MOST – a state-of-the-art telescope facility that is set to change the face of astrophysics over the next decade.

The new super-powerful instrument, which will be mounted on the European Southern Observatory’s huge VISTA telescope in Chile, is expected to detect millions of new galaxies, exploding stars and newly formed black holes, as well as study the stars, near and far, of the Milky Way. It will also test new theories of gravity and throw light on the expansion of the universe.

4MOST (which stands for 4-metre Multi-Object Spectroscopic Telescope) will measure special properties of visible light emanating from cosmic objects spread over vast areas of the sky, and far back in time. As a result, it will become the world’s most important international spectroscopic-survey facility in the southern hemisphere for learning about the universe. It is likely to start operating next year.

Professor Carole Mundell, Head of Astrophysics at the University of Bath and Hiroko Chair in Extragalactic Astronomy, said: “We’re delighted to be joining 4MOST as full members. This facility will be part of a technological revolution that is on the horizon in international astrophysics.

“The unique data from this exceptional facility will complement new datastreams that are expected from upcoming space- and ground-based telescopes currently being constructed, such as the Rubin Large Synoptic Survey Telescope, the Square Kilometre Array, the GAIA, Euclid and e-ROSITA satellites and of course the NASA James Webb telescope, which launched successfully on Christmas Day 2021.

“Involvement in these projects will drive the world-leading astrophysics research we do here at Bath to a new level over the next decade, and open exciting new opportunities for the next generation of researchers who join our department.”

4MOST will use spectroscopy – the splitting of light into its constituent colours at granular detail – to discover 10-million new transient objects (such as bright-flashing pulsars and supernovae) in the sky every night. Spectroscopy is the single most important discovery tool in astrophysics, as it provides direct measurement of the distance, velocity and chemistry of cosmic objects that can never be visited by humans. 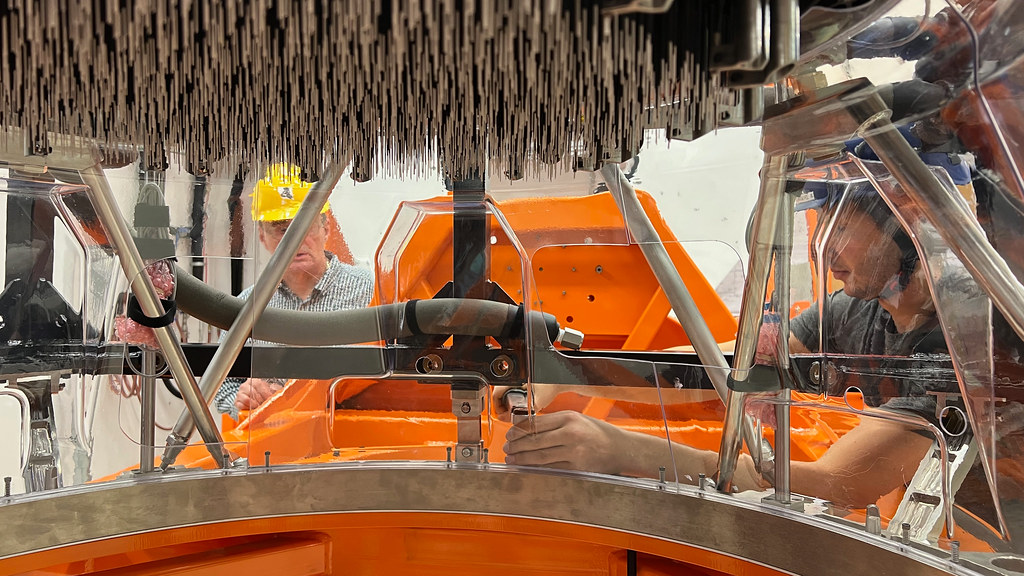 The 4MOST fibre positioner with more than 2400 optical fibres that can be positioned to an accuracy that exceeds a 10th of the diameter of a human hair (Credit: 4MOST Consortium/Roelof de Jong)

The global consortium responsible for designing, building, commissioning and exploiting 4MOST is an international collaboration of 16 major partner research institutions, and involves over 330 scientists, engineers and software designers.

As part of its 4MOST membership deal, the University of Bath will deliver a software platform to underpin all of the facility’s science work. The software – to be developed by the Bath Advanced Research Computing group in collaboration with the Astrophysics Group – will allow members of the consortium to make sense of the vast quantities of data that will result from the telescope’s findings.

Engineers, technologists and scientists from Bath will be involved in the project. In addition, the University’s Public Engagement team will be involved throughout the lifetime of the project to harness the keen public interest in astrophysics and space science.

Professor Sarah Hainsworth, Pro-Vice Chancellor for research at Bath, said: “It’s fantastic to see our global-leading Astrophysics Group become a partner in a project that will use advanced spectroscopy to understand the far universe.

“We’re also incredibly proud that this research expertise will be complemented by advanced software developed at the University, and which will be critical for the analysis and interpretation of data at the facility. This illustrates the benefit of multi-disciplinary approaches to delivering exciting new research.”

Dr Roelof de Jong, 4MOST Principle Investigator, said: “We are delighted to welcome the University of Bath as a full institutional partner. Their contribution will bring in invaluable expertise in such areas as galaxy formation, and ensure that the data can be analysed immediately once the facility becomes operational.”