The penalty shoot-out is not a lottery. Research shows how careful placement beats “hit-and-hope” every time.

The game of football is too complex to analyse in its entirety but explosive events such as free kicks and penalties are so fleeting, less than a second in practice, that they can be analysed using conventional science. Dr Ken Bray, a Senior Visiting Fellow in the Faculty of Engineering and Design, has specialised in the physics of ball flight, research which has produced valuable insights into the swerving free kick. He has also investigated the controversial topic of goal-line technology and strategies for improving the success rate in penalty kicks and penalty shoot-outs. Why penalties especially?

“The penalty shoot-out, for better or worse, is the method used to resolve deadlocked games and teams will have to prepare for this ordeal during the impending Olympic soccer tournament,” said Dr Bray.

“We wanted to understand why a team like Germany has won 84% of their shoot-outs and England only a dismal 14%. To do this we used a large indoor sports hall and professional goalkeepers. They dived from the centre of the goal from a device called a force plate, used to measure the speed of take-off. The goal was peppered with shots from a programmable ball launcher and the ball’s flight plus the details of the goalkeeper’s dive were tracked using high-speed digital cameras.”

The results were used to determine the goalkeeper’s diving envelope (see graphic), in other words, the limit of his or her reach in a maximal diving save. This identifies those areas of the goal the striker should aim for: about 70% of the goal area can technically be covered by the goalie, but the unprotected 30% is an easy target for a professional player. Does experience support these findings?

“Emphatically,” said Ken. “Detailed studies have shown that shots inside the diving envelope are saved 50% of the time. Outside, the success rate is 80%. Why play to the goalkeeper’s advantage? You might as well spin a coin if that’s your preferred tactic.”

Much has been written about the importance of practising penalties. Is this valuable?

“Yes, as long as this is taken seriously and not simply as a knock-about exercise,” said Ken. “Penalties should be practised after hard training sessions to replicate the fatigue felt after two hours of competitive football. All coaches should know the performance of the players in these exercises and penalty takers should be chosen on this basis, not by asking for volunteers as the shoot-out looms.”

Can Great Britain's teams learn from this research?

“I hope so,” said Ken. “In any case the Team GB men's coach, Stuart Pearce, should know a thing or two about penalties!” 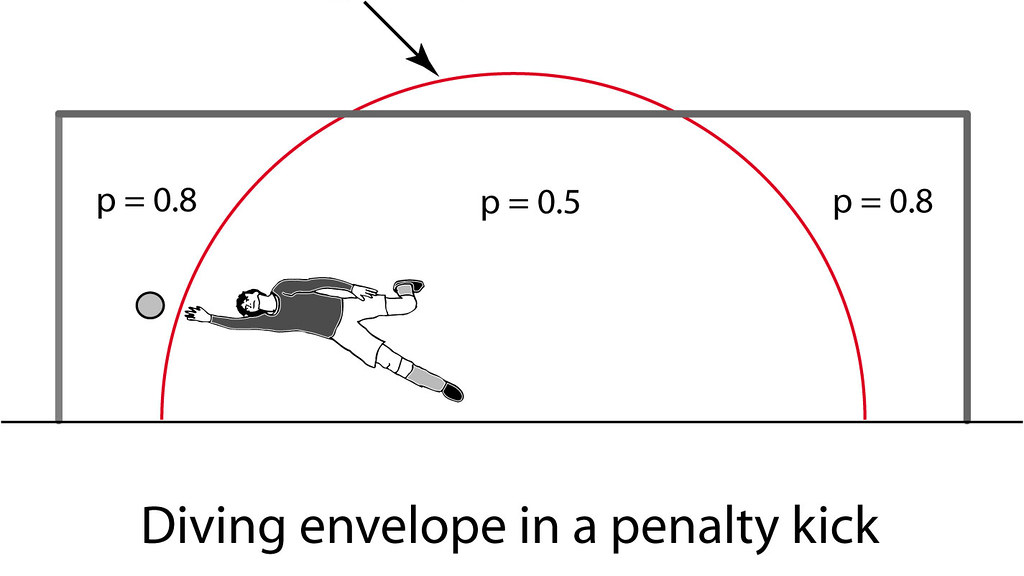