There's more to genes than DNA: how Mum and Dad add something extra, just for you

Biologists at the Universities of Bath and Vienna have discovered 71 new ‘imprinted’ genes in the mouse genome, a finding that takes them a step closer to unravelling some of the mysteries of epigenetics – an area of science that describes how genes are switched on (and off) in different cells at different stages in development and adulthood.

To understand the importance of imprinted genes to inheritance, we need to step back and ask how inheritance works in general. Most of the thirty trillion cells in a person’s body contain genes that come from both their mother and father, with each parent contributing one version of each gene. The unique combination of genes goes part of the way to making an individual unique. Usually, each gene in a pair is equally active or inactive in a given cell. This is not the case for imprinted genes. These genes – which make up less than one percent of the total of 20,000+ genes – tend to be more active (sometimes much more active) in one parental version than the other.

Until now, researchers were aware of around 130 well-documented imprinted genes in the mouse genome – the new additions take this number to over 200. Professor Tony Perry, who led the research from the Department of Biology & Biochemistry at Bath, said: “Imprinting affects an important family of genes, with different implications for health and disease, so the seventy-plus new ones add an important piece of the jigsaw.”

The importance of histones

Close examination of the newly identified genes has allowed Professor Perry and his colleagues to make a second important discovery: the switching on and off of imprinted genes is not always related to DNA methylation, where methyl groups are added to genomic DNA (a process that is known to repress gene activity, switching them off). DNA methylation was the first known type of imprint, and was discovered around thirty years ago. From the results of the new work, it seems that a greater contribution to imprinting is made by histones – structures that are wrapped up with genomic DNA in chromosomes.

Although scientists have known for some time that histones act as 'dimmer' switches for genes, fading them off (or back on), until now it was thought that DNA methylation provided the major switch for imprinted gene activity. The findings from the new study cast doubt on this assumption: many of the newly identified genes were found to be associated with changes to the histone 3 lysine 27 (H3K27me3), and only a minority with DNA methylation.

Scientists have yet to work out how one parental version of a given gene can be switched (or faded) on or off and maintained that way while the other is in the opposite state. It is known that much of the on/off switching occurs during the formation of gametes (sperm and egg), but the precise mechanisms remain unclear. This new study points to the intriguing possibility that some imprinted genes may not be marked in gametes, but become active later in development, or even in adulthood. 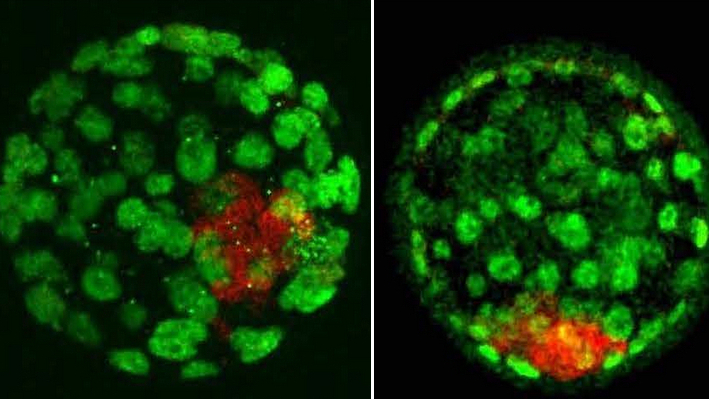 A normal 4-day-old mouse embryo (L) and an embryo of the same age that has been manipulated to contain maternal chromosomes only (parthenogenote). At this stage, the embryos (blastocysts) appear similar, but the parthenogenote will soon die, underscoring the importance of inheriting imprinted genes from both parents. Different cell types are stained green or red. Credit: Dr Maki Asami.

Although it only involves a small proportion of genes, imprinting is important in later life. If it goes wrong, and the imprinted gene copy from one parent is switched on when it should be off (or vice versa), disease or death occur. Faulty imprinted genes are associated with many diseases, including neurological and metabolic disorders, and cancer.

The paper 'Genomic imprinting in mouse blastocysts is predominantly associated with H3K27me3' is published today in Nature Communications.

Watch this video for an explanation of imprinted genes