Bath scientists have discovered a series of protein structures that are thought to be highly relevant to the onset of Parkinson’s disease.

Scientists at the University Bath have discovered a series of protein structures that are thought to be highly relevant to the onset of Parkinson’s disease. It is hoped that further analysis of these structures will open up a new avenue for potential treatment for a disease that is the fastest growing neurological condition in the world, with no cure currently available.

According to Parkinson’s UK, more than 1 million people in the UK are affected by the disease - either by living with the condition, or as a friend, colleague, or family member of someone who is. Latest estimates show that in 2020, around 145,000 people live with a Parkinson’s diagnosis in the UK.

The disease is characterised by a specific protein ‘misfolding’, where it becomes distorted and then malfunctions. The protein which researchers at Bath have studied – alpha-synuclein (αS) – is abundant in all human brains. After misfolding, it accumulates in large masses, known as Lewy bodies. These masses consist of slender αS fibres that are toxic to dopamine-producing brain cells, causing them to die. It is this drop in dopamine that triggers the symptoms of Parkinson’s Disease.

There has been much research into αS structure and the role it plays in Parkinson’s, however virtually all studies have taken place in laboratory test tubes, where the protein is purified from bacteria and studied in isolation. Research of this kind often overlooks the fact that in the living brain, αS fibres form in the presence of ‘phospholipids’ – large fatty substances that make up cell membranes and play an essential role in living cells, both in their structure and metabolism.

In the new Bath study, published in Nature Partner Journal – Parkinson’s Disease, Professor Jody Mason and his team from the Department of Biology & Biochemistry examined how αS misfolds in the presence of phospholipids. They discovered a series of misfolded protein structures that have never been observed before. These αS fibres were larger than any previously reported and took on a striking variety of shapes. Some formed flat ribbons, others appeared as long, wave-like helices, while others still were more compact and bulkier. 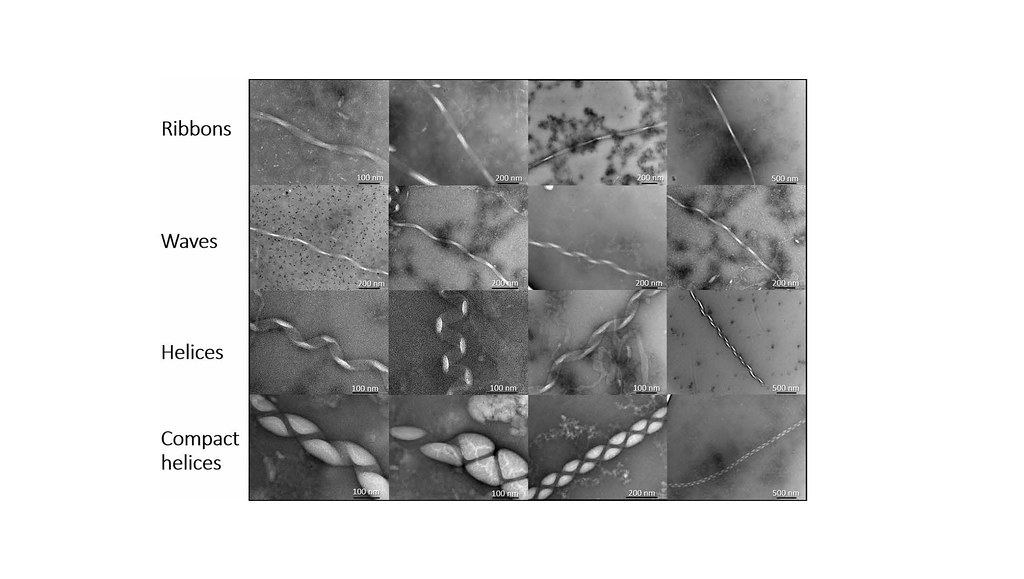 The Bath researchers hope their discovery will mark the start of a new era in Parkinson’s research. Their work lays the foundation for detailed analysis of misfolded αS fibres. Once the structure of these fibres is better understood, scientists will be able to investigate which versions are disease-causing and which are not. From here, they will be able to test drugs against pathogenic forms. This will constitute a major step forward in finding a cure for Parkinson’s and other neurological conditions.

“We know that these misfolded proteins are heavily implicated in Parkinson’s disease,” said Professor Mason. “What’s more, alpha-synuclein is known to be important in neurotransmission and in cell signalling. Given its interaction with brain cell membranes, the discovery of these structures in the presence of phospholipids may have far-reaching implications in our quest to find a disease-causing form of the protein.”

The research charity Parkinson’s UK has invested over £3.5 million in understanding the role played in the brain by αS. It recognises that unlocking the secrets of this protein could hold the key to finding a cure for the condition.

Dr Beckie Port, research manager at Parkinson's UK, said: "Alpha-synuclein is known to form different structures, and researchers have become increasingly interested in which forms of the protein may be toxic, and linked to the spread and loss of brain cells in Parkinson's – this is essential in order to develop treatments that target the right form of the protein.

“By advancing our understanding of the different structures of the protein that are likely to be present inside brain cells, this University of Bath study helps pave the way for developing treatments that may one day stop the progression of Parkinson's."