New method for building on an atomic scale

UK scientists have pioneered a way of manipulating several atoms at a time, making nanoscale electronic devices at room temperature quick and easy to build.

In 1992 the very first man-made atomic structure was created by using a scanning tunnelling microscope (STM) to gently nudge individual atoms into a tiny nanometer scale logo for IBM.

However, using this method atoms must be placed one-by-one, making the process very time-consuming, with even the most advanced microscopes taking many hours to position just a few atoms.

By carefully comparing the precise atomic position of the benzene molecules before and after the electron injections, the team was able to directly observe how high energy or “hot” electrons behave at room temperature for the first time.

Hot electrons can leak out of silicon transistors and may limit the miniaturisation of computer circuits.They also play a critical role in transforming energy from light to electricity in photovoltaics.

Their findings, published in the journal Nature Communications show that instead of moving in straight lines as anticipated, they knock around like a ball in a pinball machine.

Dr Peter Sloan from the University of Bath’s Department of Physics, explained: “Hot electrons are important in many processes but are really difficult to observe due to their short lifetimes, generally a millionth of a billionth of a second.

“We were surprised to find that the hot electrons do not travel in straight lines, but instead behave as if they were a ball in a pin-ball machine, diffusing across the surface.

“This confirms that Einstein’s theory of Brownian motion of electrons in semiconductors works even on the nanoscale. A finding that you just can’t observe with the “normal” low temperature experiments.

“Our findings help us understand the fundamental physics underlying the behaviour of hot electrons and will help pave the way for building new nanotechnology devices with atomic precision.”

Professor Richard Palmer at the University of Birmingham commented: "The Birmingham-Bath program is providing us with new eyes to visualise very fast electronic processes and so is relevant not just to electronics and computing but also improving the performance of solar cells designed to capture renewable energy.

“It's great to see British Universities collaborating so closely together."

91 per cent of our physics research was defined as ‘world-leading’ or ‘internationally excellent’ in the REF 2014 research assessment, placing our Department of Physics 13th amongst all UK departments for its research activities. 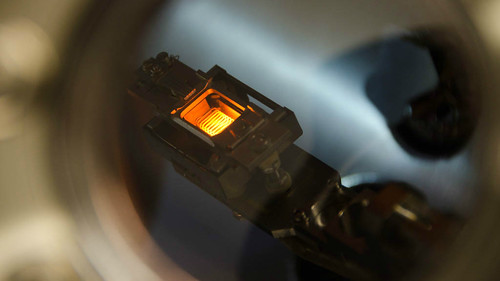