People in poor countries are exposed to more intense tobacco marketing than those in rich ones, according to research from our Tobacco Control Research Group.

The study is the first to compare levels of tobacco marketing statistically across a wide range of countries since 2005 when countries, signed up to the World Health Organization Framework Convention on Tobacco Control (WHO FCTC), have been required to adopt strict tobacco control measures, including marketing bans.

Tobacco marketing, which drives the uptake of smoking especially among young people, is still thriving despite many countries’ efforts to ban it, the study shows. The study highlights the major looming threat to people’s health in low-income countries if steps are not taken soon to rein in tobacco marketing.

Author on the study Professor Anna Gilmore, Director of our TCRG based within the Department for Health explains: “The tobacco industry uses marketing to drive the uptake of smoking among children and young people.

“Its sales are falling in high-income countries and so its future profitability depends on getting young people hooked on smoking in low-income countries. Our study reveals the extent of its effort to do this.”

Studies show that the more adolescents are exposed to tobacco marketing, the more likely they will smoke as adults. In many countries the vast majority of adult smokers begin smoking before the age of 18. According to the National Survey on Drug Use and Health, 80 per cent of smokers in the USA start before they are 18.

etween 2009 and 2012, the researchers recorded the number of tobacco advertisements and outlets selling tobacco products along a one- kilometre walk in 462 communities across 16 countries.

They also interviewed nearly 12,000 people asking them to recall whether they had seen tobacco marketing in different types of media, including on television, radio, posters, signage, online, in print or in the cinema, in the previous 6 months.

Similarly, for the communities studied the number of outlets selling tobacco was two and a half times greater in the low-income and lower middle-income countries (China, Colombia and Islamic Republic of Iran) than in the high-income countries covered by the 16-country study.

Dr Armando Peruga, Programme Manager of the Tobacco Free Initiative at the WHO, said: “The study findings reflect that comprehensive bans of tobacco advertising, promotion and sponsorship are one of the tobacco control measures least adopted by countries, particularly low-income countries. Four times more high- and middle-income countries have adopted them than low-income countries.”

Tobacco-related diseases are the single most important cause of preventable deaths in the world. It is projected that tobacco use will cause 8.4 million deaths by 2020, 70 per cent of which will occur in developing countries, where about 900 million smokers live.

Unless the WHO FCTC obligations are promptly and fully implemented, these figures are expected to rise dramatically.

Dr Peruga added: “There has been substantial progress in the past decade, but we must now recommit ourselves to our global tobacco control efforts so that everyone, all over the world is protected from the tobacco epidemic.”

The WHO FCTC was developed in response to the globalization of the tobacco epidemic. Since the WHO FCTC came into force in 2005, 180 countries have become parties to it. It is the most rapidly and widely embraced treaty in United Nations history, covering almost 90 per cent of the world’s population.

University of Bath research in Social Work & Social Policy ranked sixth nationally by overall GPA in the independently-assessed Research Excellence Framework 2014 (REF 2014). Research by the Tobacco Control Research Group was part of this submission. 84 per cent of our impact in this area was deemed to be world-leading. To find out more about the work of the TCRG see & . Last night's BBC 1 Panorama highlighted evidence of bribery and corruption by British American Tobacco in Africa. Our TCRG played an advisory role on the programmes; comments from Professor Anna Gilmore on the revelations are here

Tobacco advertising as seen on hoardings in India. 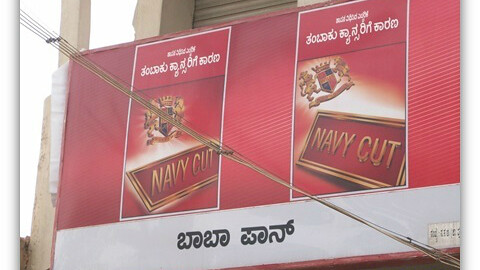