An in-house University film documenting the journey of artisanal diamonds from mine to market, has been nominated for the 2019 Learning on Screen Awards.

An in-house University film following the pathway of artisanal diamonds from mine to market and the people involved in it, has been nominated for the 2019 Learning on Screen Awards in the Educational Film (Universities and Colleges) category.

The 33-minute film Voices from the mine ,was co-produced by Dr Roy Maconachie, Reader in International Development in our Centre for Development Studies, and in-house University Filmmaker Simon Wharf from our Audio Visual Unit. Shot mainly on location in diamond-rich Kono District in Sierra Leone, it also includes sequences and interviews in Antwerp – one of the world’s main diamond trading centres.

Focusing on the locally-grounded stories of people involved in the diamond mining industry in Sierra Leone, the film explores the significant livelihood issues and the day-to-day pressures they face.

Dr Roy Maconachie explained: “I first started carrying out research in Kono District in 2003, a year after the civil war ended. Life was very difficult and everything had been destroyed in the conflict. 16 years later, I am still staying and working in the same villages, and have built some strong relationships in diamond mining communities." 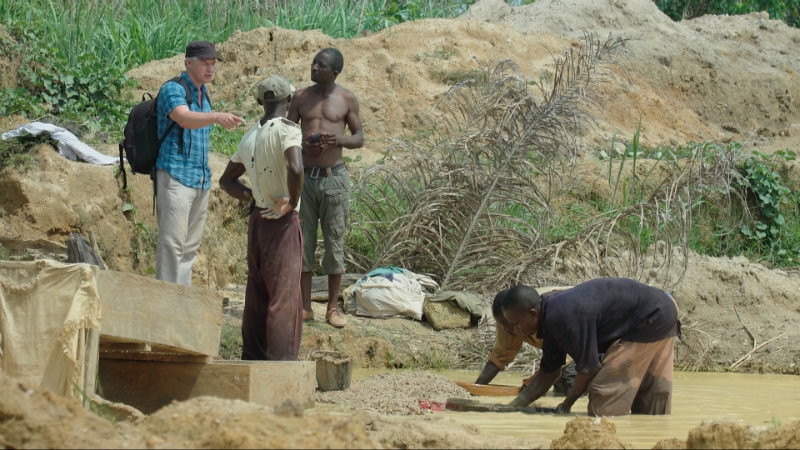 "This film provides a window into the work I have been doing in Kono over the last decade and a half. Allowing people to tell their stories in their own words, it focuses on understanding the challenges of natural resource governance at the local level, and sheds light on why it is so difficult for resource revenues to be translated into sustainable development outcomes in poor communities”, Roy continued.

The film was produced on a scale not previously attempted, thanks in large part to funding from Bath alumnus and founder and CEO of the US-based philanthropic organisation Humanity United, Dr Randy Newcomb.

Reflecting on this year’s nomination, Filmmaker Simon Wharf commented: “It’s wonderful to be nominated for the award. This film represents the most ambitious and complex project I’ve undertaken in my role at the University and to receive this level of industry recognition is fantastic. Working with Roy is a pleasure and with three films now completed together, I hope this is a collaboration which will continue to develop and thrive.”

The winning film will be announced in April at the Learning on Screen Awards Ceremony at Curzon Soho in London.

Simon and Roy have previously won the General In-House Production Award in 2017 for another University film called Gender and Fairtrade, documenting the realities of life for female cocoa farmers in Ghana.

Voices from the mine: Artisanal diamonds and resource governance in Sierra Leone from University of Bath on Vimeo.

Read more about the production of this film