We look back on over 50 years of SU societies – setting you up for success, forging friendships and even leading to gold medals.

Our Students’ Union has been the voice of the students and the hub of life outside of lectures from the very beginning. By 1967 Bath’s first student newspaper, SUL, had been published and the first RAG fundraising event hosted.

Tim Pluck (BSc Sociology 1970) was editor of SUL – now known as Bath Time – in the early years. He returned for the University’s 50th anniversary celebrations in 2016. “I was introduced to the students in the media group,” he recalls. “One of them asked me what equipment I used, so I told them: my mother’s Second World War typewriter.”

By the time the first official SU facilities were completed in 1973, University Radio Bath (URB) was already setting the airwaves alight across campus. BBC Radio 1 had been rocking the nation since ’67, and it was time for pioneering Bath students to create one of the first university stations in the country. URB was officially opened by Radio 1 DJ Annie Nightingale and will celebrate its 50th anniversary in 2023.

Former Media Officer and current SU President Alexander Robinson (BEng Civil Engineering 2022) says: “As URB enters its 50th year, we’re celebrating the impact of student media and the crucial voice it lends to students. Bouncing back from the pandemic there’s a sense of ambition among media members and a motivation to provide a real benefit to students – keeping them informed about campus life from their new home in the Student Media Hub within the SU.”

One of the oldest societies at Bath is the student fundraising group Raise and Give, better known as RAG. Professor Richard Mawditt OBE (MSc Business Administration 1983; Hon LLD 2008) joined the University as its first accountant in 1966 and has fond memories of the now-defunct RAG procession. “Students would dress up and make their own floats to go on the back of lorries,” he recalls. “They’d line up in Victoria Park and the best float would win the Registrar’s Cup. The procession then went all around the city – the traffic in Bath wasn’t quite so busy back then!” 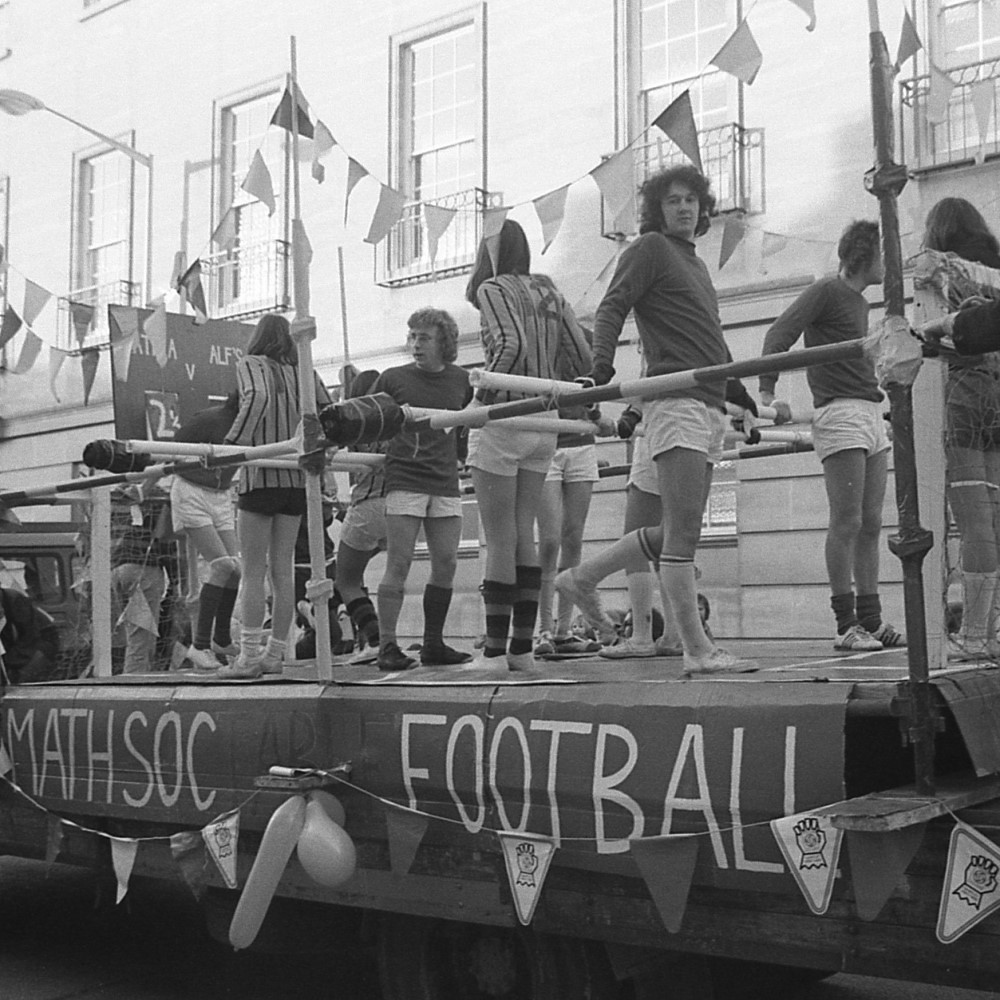 For Siôn Lutley (BSc Economics 1992), his experiences with RAG kickstarted a career as a fundraiser for charities and universities, including Bath. “I feel very proud of being part of the team that had a record year when I was RAG Sabbatical Officer in 1992-3,” he says.

“We raised over £90,000 for local and national charities, which wasn’t bad for a bunch of students doing all manner of things in their spare time. The annual RAG Week with its ‘Stunts Day’ featured everything from trifle wrestling through to ‘climbing’ Milsom Street with ropes courtesy of the climbing club, to hitchhiking from Bath to Paris.” 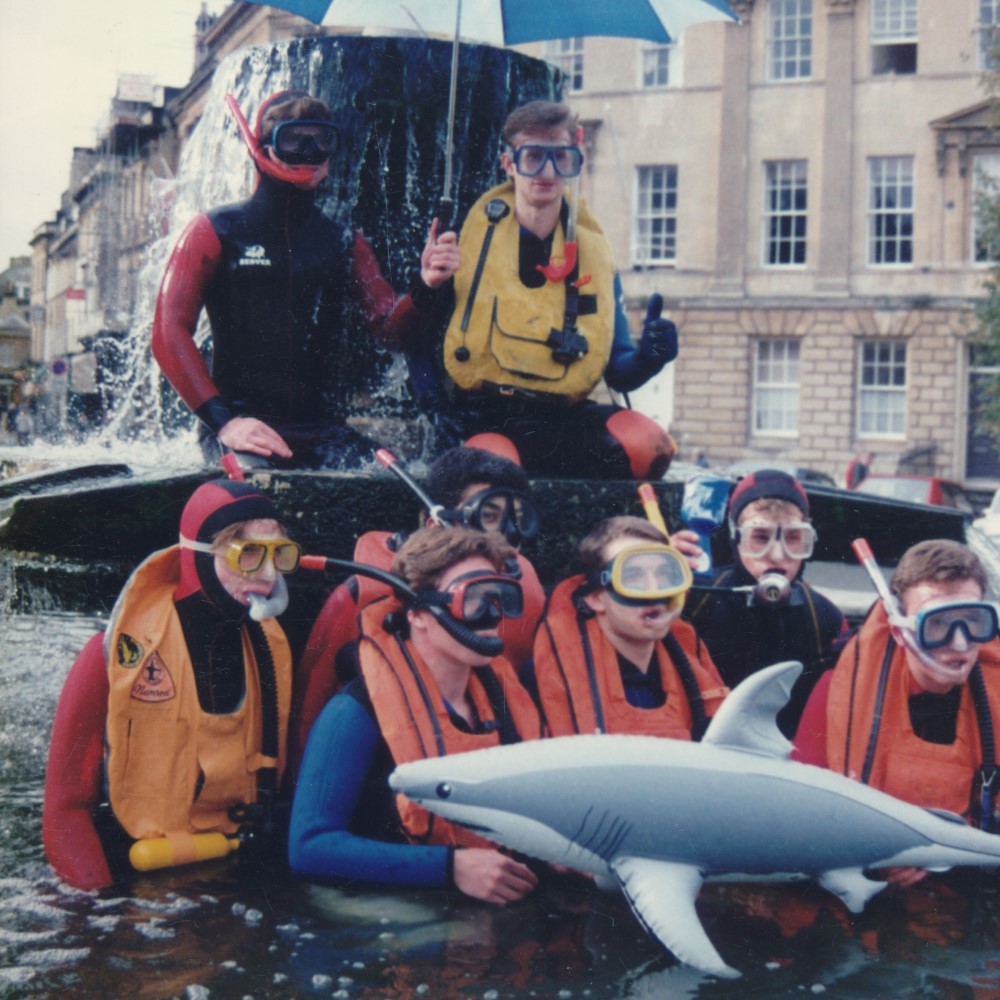 While some student groups have been going for decades, others have been a more fleeting reflection of the changing times. The sewing and pedal-car clubs of the ’70s were replaced by activities such as salsa and skateboarding. But creativity has long been celebrated at the University. A dedicated space on campus was created in 1974, when an outhouse from the original Norwood Farm was turned into the Arts Barn.

“We may be a science-based university, but student drama has thrived from the outset,” says Richard. “Both students and staff would be involved in productions; it was a pleasure to watch them perform with such enthusiasm.” What started as the drama society more than 50 years ago became known as Bath University Student Theatre (BUST), and the Arts Barn evolved into The Edge to accommodate the ever-growing popularity of dance, drama and the arts. Today there are 16 societies dedicated to these areas alone.

BUST became so big that a second group was formed, called BUSMS (Bath University Student Musicals Society). 2021-22 Chair, Lauren Green, tells us they work very closely with Backstage – an SU group that provide tech support for live events – and together, they’re known as TITS (Totally Integrated Theatre Societies). “I’m so immersed in this world that I forget about the acronyms and get funny looks when I say I’m going to a TITS social,” she laughs.

Lauren has been involved in BUSMS since Freshers’ Week 2018, when she began studying for a degree in sports science: “The best thing about it is the community,” she says. “Joining a society means you’re automatically going to meet people with similar interests. We’re really close, despite having over 50 active members, and alumni often come back to watch our shows. It was really nice to meet so many former members at our virtual 25th anniversary celebrations during the 2021 lockdown and to hear their memories.”

All student groups require a level of commitment, but arts and sports demand more than most. “We do five shows a year, and each one takes a month of rehearsing four times a week. It’s very intense,” she adds. Students, staff and the public alike can come along to The Edge and watch the productions. They often venture into the city centre, too. It’s not unusual to hear the harmonies of multi-award-winning a cappella group Aquapella in SouthGate for the enjoyment of tourists and fellow Bathonians.

“Busking is a big part of our week and a fun way to make extra income for the group,” says Aquapella’s marketing director Ellie Baldwin (BSc Biochemistry 2022). “The songs we perform have been passed down through the generations of members. Alumni are still very involved – we have a reunion every year and it’s a chance for new members to meet them.”

Student groups are a great way to try something new, develop skills and maybe even uncover hidden talents. Heather Stanning OBE (BSc Sports Technology 2007; Hon LLD 2018) initially joined the Bath University Boat Club in 2003 for the social life, but went on to become an Olympic, World and European rowing champion.

“I wanted to meet great people, have a good time, have great nights out in Bath and that’s exactly what I did – but I also learnt an amazing sport,” she said when she was inducted into the Team Bath Hall of Fame in 2016. “Most of the friends from university that I am still in touch with are the ones I rowed alongside. The guys that you train with at six in the morning down on the river, they are the ones you’ll still be in touch with.” 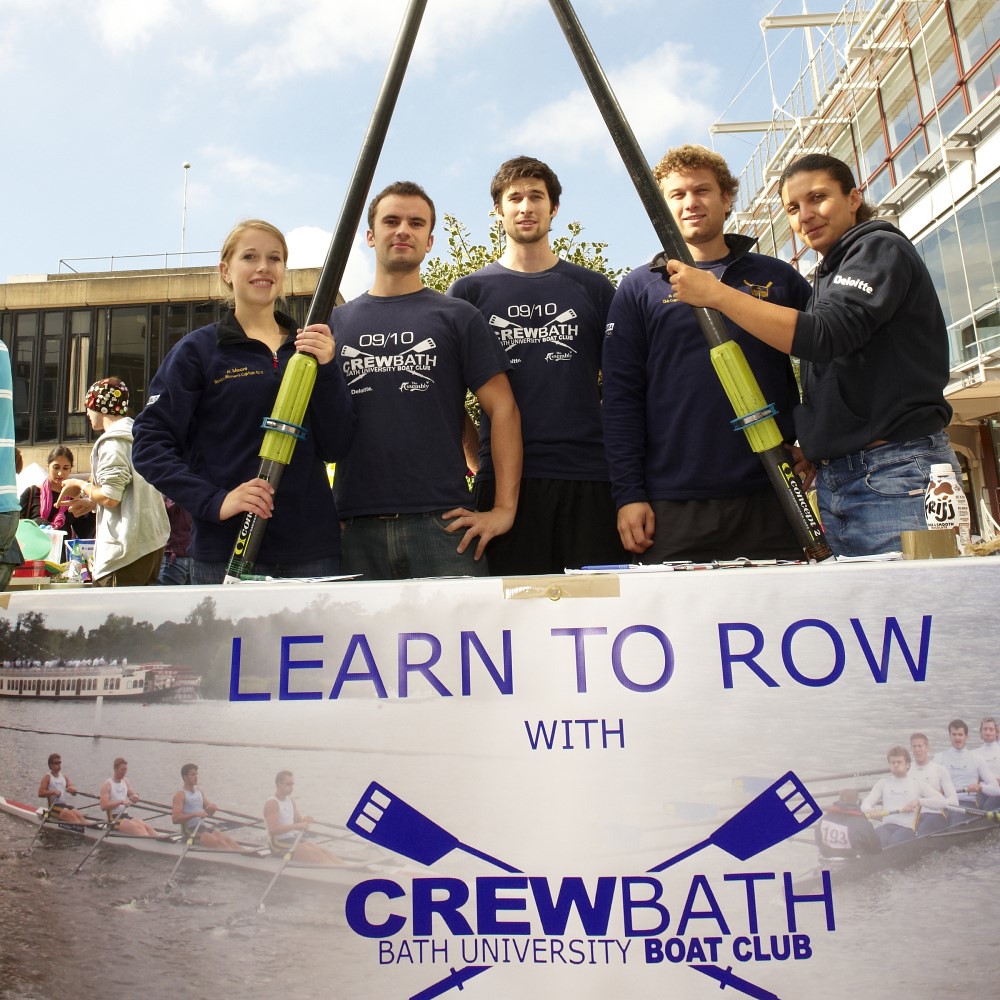 They span cultural values, the arts, ethical and political issues, as well as diversity and support groups. There are activities, too, from hip hop to Harry Potter, animation to entrepreneurship and so much more.

As a student, Zoë Paumelle (BSc Management 2021) tried out as many as she could. “I was involved in so many different faith and cultural societies, and going to socials all the time,” she says. “The Scandinavian society would have an ABBA night, and the Malaysian group would make traditional dishes for you to try – it’s a great way to learn about different cultures and that’s really enriching no matter where you’re from.”

It's perhaps no wonder she became the 2021-22 SU Activities Officer. “I just really, really love societies – they’re like a home away from home,” she says. “I’m from France and moving to the UK for university was daunting. In a new city with people you don’t know, you feel like you want to belong somewhere. Societies are like a ready-made community that want to welcome you as much as you want to join them. It’s a massive part of making people feel like they belong at Bath.”

What are your memories of societies at Bath?

This article was written by Jodie Tyley for BA2 Issue 30, published in September 2022.