Journey to the ends of the Earth

Bath researchers share their experiences of freezing temperatures and penguin poo on an epic Antarctic voyage to understand the effects of climate change.

As you approach the remote island of South Georgia, Sir David Attenborough welcomes you via an official government video. The famous broadcaster (and Bath honorary graduate) warns of the need for strict biosecurity measures to protect the pristine, richly biodiverse environment. Rats are forbidden, with specialist dogs used to scour boats for any rodent stowaways before they depart for the island. “That’s when it hit me: oh wow, this is big time,” says PhD researcher Katie O’Brien.

“Arriving in South Georgia was a highlight for me,” she continues. “I’ve never seen so many animals in my life. It’s one of those places in the world that very few people have actually set foot in. It’s almost bewildering to think back on it; it was just such an amazing experience.”

Second-year biology PhD student Katie and her supervisor, Dr Jane Younger, were part of an international team of scientists studying penguin colonies, such as South Georgia’s 500,000-strong King Penguin population – the largest of its kind in the world.

The island was one of the stops on a 30-day voyage aboard specialist polar expedition yacht Vinson of Antarctica, which set off from the Falkland Islands and went south to the Antarctic Peninsula, before heading north-east to South Georgia and then returning back to the Falklands. The field work took in six species of the sea bird, from the Magellanic penguins that you might typically see in zoos, through to agile Rockhoppers and mohawk-crested Macaroni penguins.

This includes analysing samples of blood and droppings from the birds to identify which viruses and parasites are present in their bodies, as well as how their diets and ecological associations are adapting as climate change affects prey availability. The effects of climate change are an especially pressing issue for the Antarctic Peninsula, where temperatures rose by an alarming 3°C between 1970 and 2020.

“What we would expect as things warm up is that new parasites and diseases might be able to move further south into areas such as Antarctica, where they weren’t before,” explains Jane. “That’s what we think is maybe happening, but no one’s really monitoring it. It’s definitely something we need to look at and see if certain diseases might be a new problem for penguins in the future.”

This information will then help scientists to identify penguin species that may be particularly vulnerable to the effects of climate change and aid in future conservation work.

Jane continues: “Our results from the trip will help to establish a baseline, and hopefully I’ll be able to go back every few years and keep sampling to see how things are changing over time.”

During the trip, the team collected over 500 samples of penguin droppings, as well as around 200 blood samples. They are now preparing to analyse the DNA from these, which will reveal an amazing level of detail. For example, the pathogens present in the faeces can be compared with infection markers in the same bird’s blood, which can show whether they are actually ill as a result.

Getting the samples wasn’t always a clean and easy process for the researchers, however: “One person will hold onto the penguin so it’s not struggling. You tuck their head under your arm so they can’t bite – although I think we all got bitten during the trip. They don’t like being picked up!” says Jane.

“A second person takes a quick blood draw from their foot. It doesn’t take long, less than five minutes – the penguin will usually poo on you during that process, which gives you another sample.”

Katie adds: “As scientists, we’re there to do research; we’re not there to damage the environment that we’re trying to conserve and understand more about. One of the main things that I learned during the trip was how to avoid disturbing colonies. I’ve learned to be very quiet, crawl on the ground and be quite sneaky!” 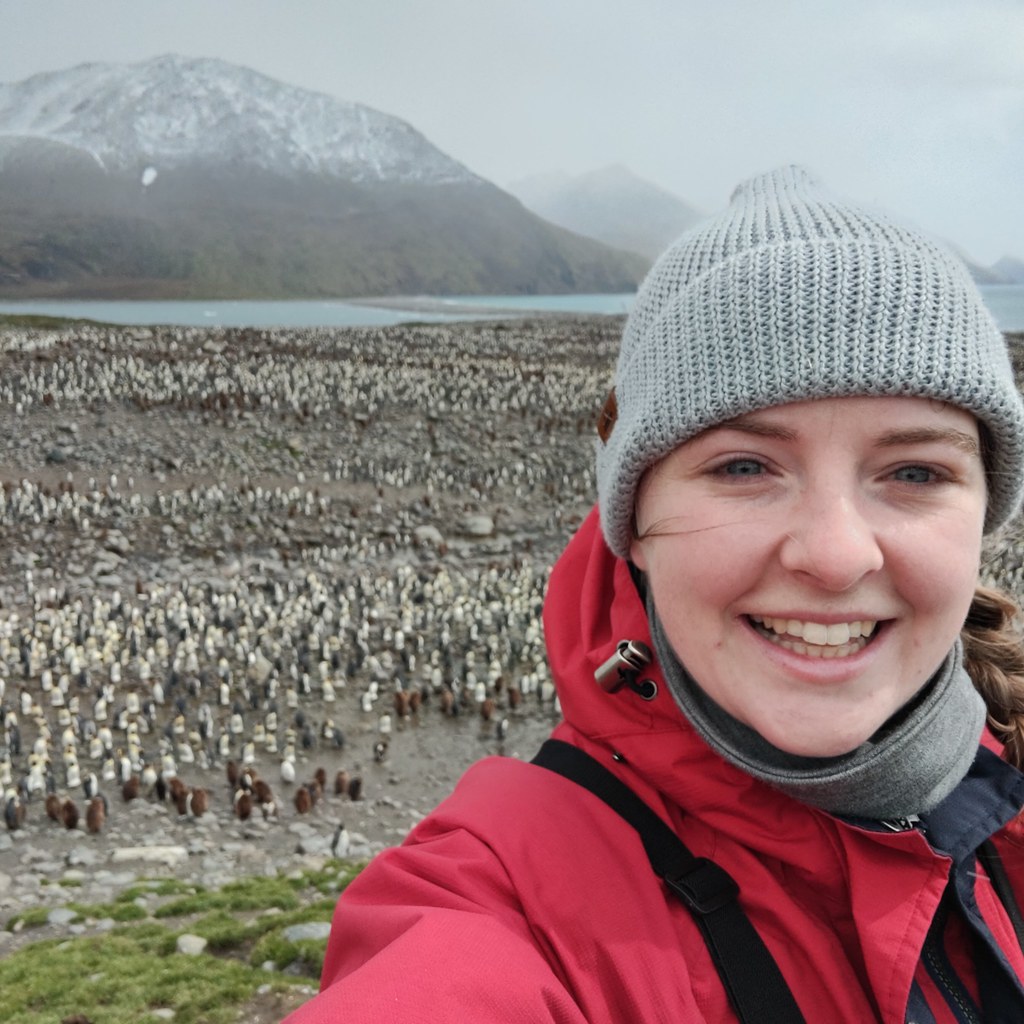 Jane and Katie are both members of the University’s Milner Centre for Evolution, which opened in 2018 thanks to a £5 million gift from alumnus Dr Jonathan Milner (BSc Applied Biology 1988; Hon DSc 2013). The Centre aims to ask the big evolutionary questions, as well as to conduct research and community outreach work. 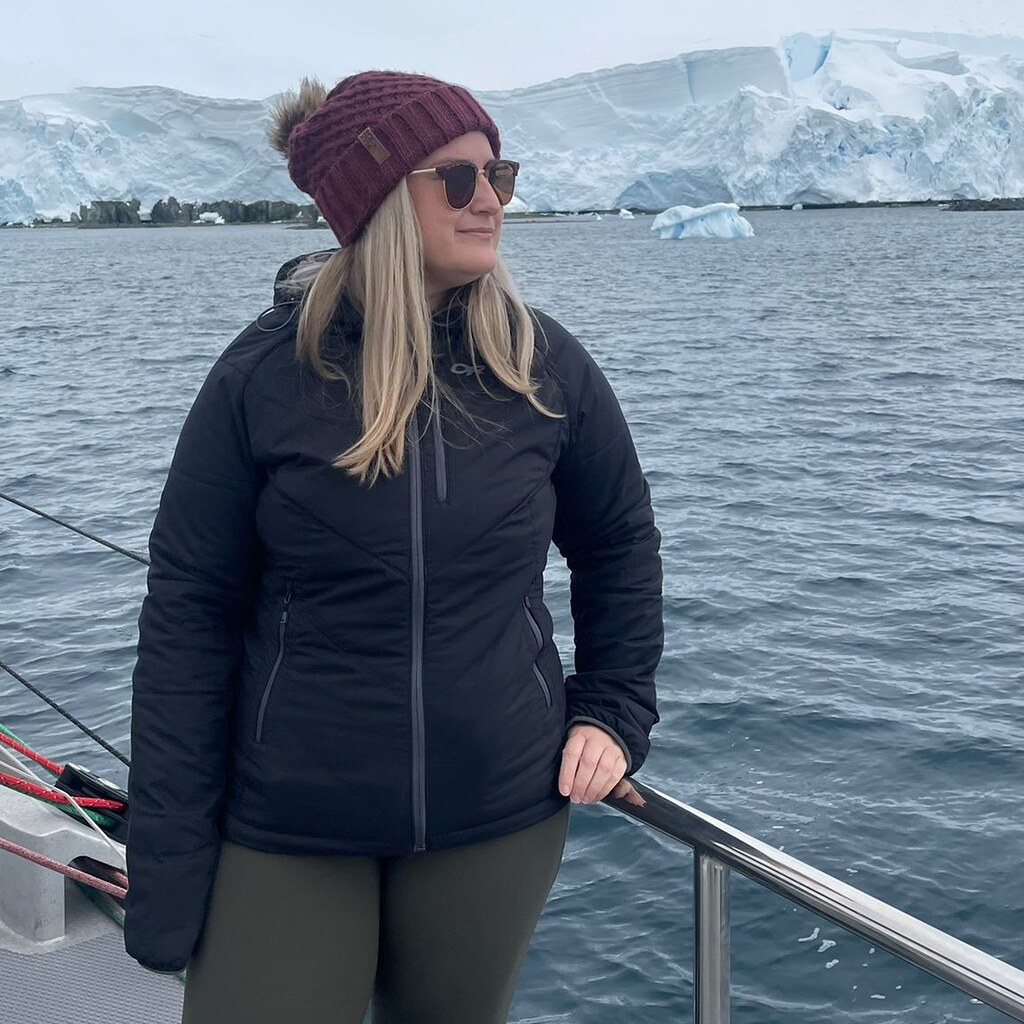 This was used in part to purchase cold-weather gear to help the team brave the extreme conditions. Taking place in December 2021 and January 2022, the expedition fell at the height of summer for the Southern Hemisphere. While this meant the weather was at its warmest, it still involved temperatures of a chilly -5°C, plenty of layers and socks that more closely resembled mittens.

You might think of the Antarctic and its surrounding territories as plain, flat expanses of icy tundra, the team were in fact greeted by a vista of craggy mountains – a beautiful contrast to the potentially claustrophobic quarters of the 23.5m, six-cabin yacht. The team then ran ashore in small boats called Zodiacs that enabled them to reach remote colonies.

“Using a small vessel meant we could access more areas, taking samples from regions that hadn’t been surveyed for several decades, which will give us a much better picture of what’s happening across the Antarctic,” explains Jane.

The expedition was lucky to rarely run into rough seas, when high winds cause swells that prevent the Zodiacs from making trips ashore. The isolated environment kept the team on their toes, though, such as when a large block of ice sheared off a cliff and into the water near the yacht.

“A wave went over most of the boat, we rocked over onto our side and things were thrown around,” shares Jane. “Even the captain said they’d never seen a chunk of ice that big fall that close before!”

But the occasional scare was worth it, as Jane and Katie are both incredibly positive about their experience onboard the Vinson of Antarctica – and about the future of their research.

“No one’s really done an in-depth study of this type on animals before,” adds Katie, “especially on something as mad as a penguin!”

Left Bath around 4pm to set off for the Falkland Islands.

Flew from Brize Norton military base to Dakar (Senegal) then on to the Mount Pleasant complex in the Falklands.

Total journey time from uni to the boat: 27 hours.

First day of sailing, didn’t feel too seasick at the start. Saw my first wild penguin (Magellanic) in Port Stanley.

Saw land for first time in a few days.

Took the night watch on the boat as we were heading into Antarctica’s Croker Passage – very surreal realising how far away from the rest of the world we are right now.

The most amazing morning of my life – woke up in Antarctica with the boat surrounded by a pod of humpback whales.

Anchored for first time, had a lovely dinner and some wine with the crew to celebrate.

First day of fieldwork; brain and body are tired after but it was so much fun.

Seals all over the ice.

I smell like penguin poo all the time now.

Starting to forget what my normal life was like.

Saw a night sky for the first time since leaving for the Falklands (in Antarctica the sun never went fully down – just looked like a dusky afternoon).

Macaronis lived on a cliff face – very hard site and mucky, too.

Sailed to Gold Harbour, slept next to a glacier and around 25,000 King penguins.

Saw a baby South Georgia pipit by chance while walking to the field site, what a treat! Fieldwork at Cobbler’s Cove.

Landed boat at Grytviken – used to be a whaling harbour, first buildings I’ve seen in weeks.

Last day on South Georgia – so sad to be leaving.

Macaronis, Gentoos and Kings at Elsehul.

My body is exhausted but I loved every single minute.

Landed in the Falklands! Spent the day in the gift shops and went birding.

Went to the pub and met some locals.

Moved everything out of the boat. Very strange saying goodbye to the crew, they were like family to me while we were away.

Went to a hotel and had my first long shower since the end of December.

Turned my internet back on and had over 1,000 messages – going to take me all night to catch up with everyone I missed back home.

Donate to the Alumni Fund

This article was written by Emma Senior for BA2 Issue 30, published in September 2022. Photos by Katie O'Brien.