Listening to icebergs on climate change

What happens to a glacier when no one is around? This is the story of our researcher mapping the behaviour of icebergs using underwater acoustics.

Just as we approach the beach, a loud bang can be heard, and we turn back in time to see parts of the glacier falling off. We have seen that before, and it is always spectacular. As blocks of ice fall into the water, they create long waves, which do not seem that bad from our place. We use the first ones to help haul the boat onto the beach. And then the big one comes in… It looms large very quickly, bringing a 5-tonne iceberg too close for comfort. And then the gravel below my feet is pulled down, and I feel sucked into the water deeper than I expected…

In July 2014, at the height of the Arctic summer, Dr Philippe Blondel travelled to the Hornsund glacier in Svalbard to listen to icebergs.

It wasn’t his first arctic field trip and he certainly didn’t have a shortage of field experience in his research team — an international group with members from Poland and New Zealand. But the extremely variable Arctic conditions still led them into a few close shaves.

I should have known: mini-tsunamis are a common risk near glaciers, and like other tsunamis, their height increases as they reach shallower water. Here in this fjord, the seabed is very steep, so the waves increase only very close to the shore. In other places in the Arctic, they can crash big icebergs onto structures or small harbours (when the places are settled).

Mini tsunamis are just one of the implications of melting glaciers. The tsunamis can be destructive for the infrastructure in local communities — not so much of a problem in Svalbard, but much more so in places like Alaska and Greenland.

Large amounts of freshwater leaking to fragile ecosystems is another alarming consequence. It can kill some species of plankton and affect the entire food chain in the ecosystem.

But what has listening to icebergs got to do with any of that?

"Hornsund is a typical Arctic glacier and like all glaciers in Svalbard, it is melting, because of climate change”, Philippe says. “Sometimes, this melting is continuous — sometimes it is large and unexpected, with one large part of the glacier falling off. These loud bangs can be heard far underwater, and each acoustic signature tells us something about where it happened and how it worked."

To date, icebergs remain a bit of a mystery. Even at the best of times, they present field researchers with difficult conditions and when the polar night falls, there is no one to keep an eye on what’s going on with the glaciers.

That’s why we listen. To the hissing, crackling and creaking of ice. Waves lapping on the sides of the icebergs. Noise from the glacier fronts. Understanding the sources of the different types of noise is important.

"Dividing the noise into frequency bands is like using a mixing table on a symphonic recording”, Philippe explains. “Isolating the bass, the violins, the drums, the brass instruments. After that we can start seeing how they relate to each other."

The science of ambient noise

Noise from the small icebergs brought to shore varies with the weather. Sometimes, it is so loud we can hear from the polar station several hundreds of metres away. Sometimes it can only be heard when working on equipment at the workshop by the beach. What makes these icebergs silent, or loud?

Philippe travelled to Svalbard with two fellow researchers: Grant B. Deane, a New Zealander based at the Scripps Institution of Oceanography in California; and Jaroslaw Tegowski, professor at the Institute of Oceanography at the University of Gdansk, Poland. Their summer field work relied on previous measurements done by other members of the team, including Oskar Glowacki and Mateusz Moskalik from the Institute of Geophysics, Poland.

The team isn’t alone in using sound to learn more about how the environment is changing. ‘Soundscape ecology’ is an emerging field of research focusing on the science of sound in the landscape.

Stuart Gage, Professor Emeritus at Michigan State University, described soundscape ecology as a stethoscope. “A doctor can use a stethoscope to tell ten different things about your heart”, he said in an article on the technology news site The Verge. “We’re holding a stethoscope up to nature. We’re listening to the heartbeat of the environment."

Philippe’s team is listening to the heartbeat of the glacier with hydrophones — microphones designed for underwater use.

"Measuring underwater noise greatly benefits from using several hydrophones — a bit like using our ears to locate the source of a noise", Philippe says.

Using two hydrophones, they can hear how noises are located in space related to each other.

"Are all the violins in the same group? Is the drum on the left or on the right? Similarly, for ice, we can find out if the noise comes from the front of the glacier - a sign of impending trouble - or from further inside the glacier — a sign of trouble later or just normal cracking, kind of like a house heated by the sun or cooling down at night."

The glacier has changed over the last days, with more and more blue ice and blue icebergs. Ice from the top of the glacier is white, and becomes blue when it is compressed at the base of the glacier. The front of Hansbreen is gleaming in different shades of blue today, meaning more ice from the base has been exposed and is now melting. There are large blue icebergs all around us. We’re pushing them away from the boat using our hands.

After his first trip to Svalbard in 2007, Philippe and his colleagues showed how environmental processes and weather could be unravelled from ambient noise coming from icebergs.

After the most recent field study, they came back with mountains of data — and more to come, as they installed and left behind underwater monitoring buoys.

Part of the research team is going back for the buoys later in the spring. The hope is that they will have captured the onset of the ice cover in the fjord as well as the noises when its begins breaking up earlier in spring.

The work the team did this summer has already been fast-tracked for publication by the Journal of the Acoustical Society of America with a second paper awaiting review.

The team has presented its work at the American Geophysical Union international conference in December in San Francisco and Philippe has been asked to chair a session on polar noise at the Ocean Noise conference in Spain in May.

This morning, the beach was littered with small and big icebergs. Their clinking noise could be heard even from the base, 200m away. After the rain of the last days, the glacier has melted a bit more, and there is a lot of ice, including blue ice, everywhere around.

"Climate change is going to be felt in different ways around the world, but one direct effect of higher temperatures is the melting of ice", Philippe says.

"By listening underwater, we can monitor how much melting is going on — from icebergs and glacier collapses above the water, but also from glacier collapses below water which you don't know about until they hit you. Underwater sound will warn us from these collapses beforehand. It can also indicate how fast melting is happening and we can see how it is affecting marine animals."

The data will also benefit other researchers from all over the world. The better we understand the ambient noise field of the arctic, the more we can begin to unravel the mystery of these huge melting masses.

Extracts and photos from Philippe’s blog Sounds of the Planet.

Listen to the underwater recording

This audio clip was recorded in Hornsund Fjord, Svalbard. The background sounds of the water are punctuated by icebergs melting or collapsing, with the Hornsund glacier calving in the distance. 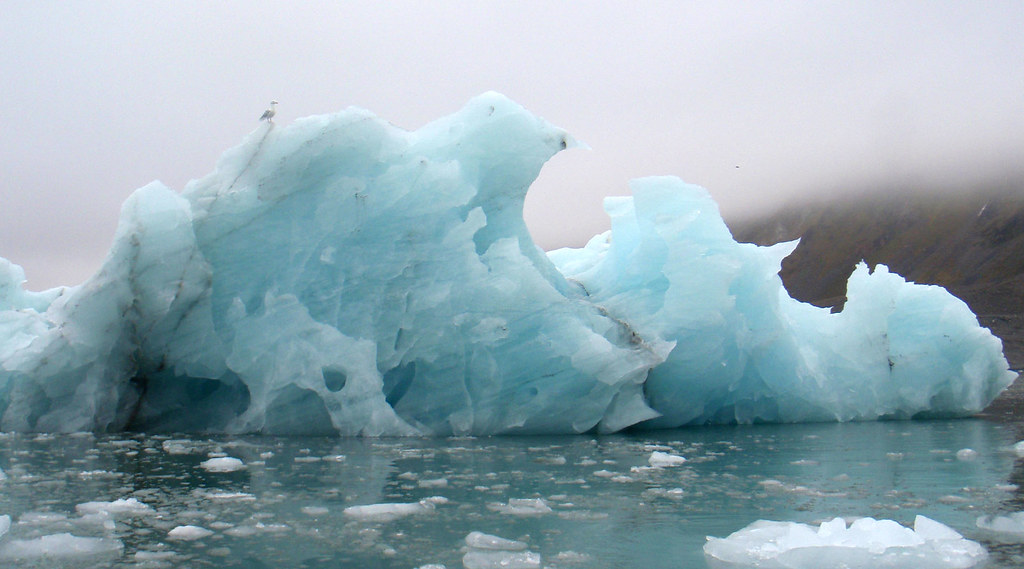 Find out more about our research